Children of Terror Left Behind in Iraq

Update Required To play the media you will need to either update your browser to a recent version or update your Flash plugin.
By Caty Weaver
15 January, 2018


"Maya" is a plump, smiling child less than two years old. Her parents are dead and she might never learn about them.

Maya is not her real name. Her mother and father were suicide bombers for the Islamic State group. Her four siblings were among their victims.

Maya now lives at an orphanage in the Iraqi city of Mosul.

"She was skin and bones when we got her," says Sukaina Mohammed, director of the Department of Women and Children in the Nineveh province.

Mohammed points to another child.

"That baby had six broken ribs when she arrived," she says.

As Iraqi officials deal with the children IS left behind — orphans, children of sex slaves and children of foreign fighters — aid workers say they want to protect the youngest ones from their painful beginnings.

None of the small children born of or raised by IS supporters are considered a threat to society. However, officials say many people will denounce them anyway.

Sukaina Mohammed says Maya's best chance for happiness is if she and those who might adopt her know nothing about her parents.

"I don't tell people which babies' parents were IS militants," Mohammed explains, "because if someone wants revenge on IS, they might hate the children." 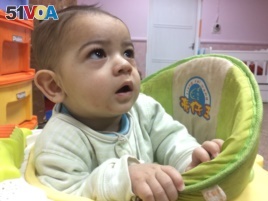 Orphans of Islamic State fighters and their victims live in this Mosul, Iraq, orphanage together, and neither the children nor their caretakers are told their individual origins, Dec. 24, 2017.

The less lucky ones

The Haj Ali refugee camp in northern Iraq is home to many of the wives and children of IS fighters who are now dead or in jail.

Dalal Tariq is an aid worker with the International Organization for Migration. She says the children were terrified when they arrived at the camp.

"They were afraid of the soldiers," she explains. "IS militants told them the soldiers would beat them up."

Other children had watched their fathers die in battle and, in Tariq's words, "they come here nearly destroyed."

The IS war is now officially over in Iraq, and families living in the camp are not accused of any crimes. However, they cannot leave, says Hoda, the mother of three children. Her husband was an IS fighter before he was killed in an airstrike.

In her village, the children of IS are considered suspect, and local leaders ordered her not to return.

"Even if my family comes here to visit me, they could be in danger."

Before they were found

At the orphanage in Mosul, many children wait for the chance to be adopted.
"All the children we found were in a terrible state," explains Mohammed. "I remember one time, we found a baby who was so thirsty, she died in the hospital after only a few days. She had no energy left to live."

Some babies were rescued from the streets after being left in the sun as bait to bring Iraqi soldiers into the line of fire. Others were found in destroyed homes after their parents died fighting for IS.

There are also the children of rescued sex slaves, whose families will not accept them. Many children were just found alone in the wreckage left by airstrikes and battles in Mosul. One boy survived for seven days alone under a collapsed house.

"Some we don't know about exactly," Mohammed later says, pointing to a girl about six years old. "She speaks only Turkish. We think she was kidnapped by Turkish militants in 2014."

Some countries are trying to get back the orphans of foreign IS fighters in Iraq and Syria.

Last month, three children were sent to live temporarily with a family in France. Their mother and youngest sibling remain among the foreign wives and children of IS fighters held in Iraq. The non-profit group Human Rights Watch says there are 1,400 such detainees.

Officials from Germany, Russia and other countries have requested the return of the children of their nationals.

The United Nations Children's Fund (UNICEF) says children are increasingly targets of fighting around the world. It says the young are also used as human shields, and forced to fight in battles.

"Children are being targeted and exposed to attacks and brutal violence in their homes, schools and playgrounds," noted Manuel Fontaine, UNICEF's director of emergency programs.

"Such brutality cannot be the new normal."

crib – n. a small bed with high sides for a baby

adopt – v. to take a child of other parents legally as your own child

thirsty – adj. having an uncomfortable feeling because you need something to drink : feeling thirst

bait – n. something (such as a piece of food) that is used to attract fish or animals so they can be caught

expose – v. to cause (someone) to experience something or to be influenced or affected by something