Children Starving in Yemen as Risk of War Continues

Update Required To play the media you will need to either update your browser to a recent version or update your Flash plugin.
By Andrew Smith
20 October 2022


Hafsa Ahmed is two years old. As she lies on a hospital bed in Yemen, it is very difficult for her to breathe or open her eyes.

Hafsa is dying of starvation. She is the youngest of six children. One died from malnutrition. Her father Ahmed, 47, works as a day laborer. Each day he can pay for only some flour and cooking oil.

Ahmed and his family live in Hays, about 120 kilometers south of the port city of Hodeida. The town has seen some of the worst fighting in Yemen's war. 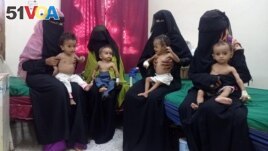 Mohammed Hussein is a 49-year-old father of five. They live in a camp for displaced people near the town of Abs in the northern Hajjah area. He said he has had to move four times since the war began in 2014.

"I lost my home, farmland, everything," he said over the phone.

Three years ago, he lost a 9-month-old son. Now, Hussein has a 1-year-old and a 3-year-old who are starving. "There is no money, and I am jobless," he said. "They could die also from hunger."

There are more than half a million children in Yemen who are severely malnourished. Overall, the United Nations says around 2.2 million Yemeni children are hungry. And about 1.3 million pregnant or breastfeeding women had severe malnutrition this year.

Hunger has long threatened the lives of hundreds of thousands of Yemen's children. Now, the eight-year war between Iran-backed Houthi rebels and a Saudi-led coalition is threatening to return after a six-month truce.

Since the war started, more than 150,000 people have been killed and 3 million have had to leave their homes.

Yemenis, and international aid groups, worry that if fighting starts again, hunger and starvation will get worse. And the war in Ukraine is making the situation more difficult in Yemen.

Wheat is a very important part of the Yemeni diet. Forty percent of its grain came from Ukraine until Russia's invasion cut the supply.

Worldwide, the U.N. food agency has reduced the amount of food for millions of people because of a lack of money and higher food prices.

But the World Food Program has centered its attention on the 13.5 million Yemenis most at risk. The U.N. said that by the end of September, its aid plan for Yemen got $2 billion of the $4.27 billion needed to provide help to 17.9 million people.

malnutrition –n. lacking enough food to meet the needs of the body, often over a long period of time

organ –n. a part of the body which has a specific function, such as the heart, lungs, liver, and the like