Air pollution decreased in China in 2015 after it used less coal.

Carbon dioxide is a major part of air pollution, also called greenhouse gases. It is released into the air when coal is burned. 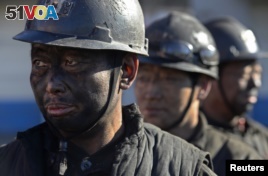 Miners wait in lines to shower during a break near a coal mine in Heshun county, Shanxi province, Dec. 5, 2014.

Twenty years of economic growth made China the world's top producer of air pollution and greenhouse gases. The country has moved to hydro, nuclear and solar power and that has cut coal use.

Shannon Van Sant reported on this story for VOANews. Jim Dresbach adapted the report for Learning English. Kathleen Struck was the editor.

tackling – v. to deal with something difficult

greenhouse gas – n. a gas, like carbon dioxide, that absorbs infrared radiation and trap heat in the air