China Could Be First to Mine Deep Sea Minerals

Update Required To play the media you will need to either update your browser to a recent version or update your Flash plugin.
By Susan Shand
02 November, 2019


China is likely to become the first country in the world to start mining minerals from the ocean floor.

The head of the International Seabed Authority, or ISA, said that will happen if international rules for exploitation are approved next year.

Minerals on the floor of the ocean, such as nickle, copper and manganese can be used in smart phones, electric car batteries and many other devices. 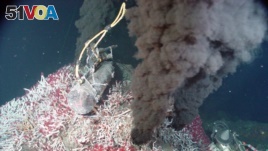 A hydrothermal vent emits jet-black smoke. This material is usually made of minerals that solidify and form chimneys on the sea floor. However, hydrogen can also be a byproduct of vents. (Photo courtesy of National Oceanic and Atmospheric Administration)

The ISA has already signed 30 agreements with governments, research organizations and businesses to explore the bottom of the ocean, also called the seabed. China has signed five such agreements.

The ISA was established to supervise seabed resources under the United Nations Convention on the Law of the Sea (UNCLOS). The group hopes to have rules for seabed exploitation by July 2020.

"I do believe that China could easily be among the first (to start exploitation)," said Michael Lodge. He is the ISA general-secretary who visited China recently.

"The demand for minerals is...increasing, there is no doubt about the market," he added.

There is also interest from European countries including Belgium, Britain, Germany, and Poland and from the Middle East as well.

However, no country has yet shown that deep sea mining can be cost effective. Some independent, non-governmental organizations have questioned whether it would be possible to reach a deal on exploitation rules by next year.

"I think, it's pretty good. I think the...draft is largely complete," Lodge said. He was answering questions about the possibility the rules will really be in place by next July.

One of the issues remaining to be decided is the amount of money that will be paid to the ISA for subsea mineral exploitation outside of national waters.

Lodge explained that the ISA, which is based in Jamaica, wants to receive four to six percent of the value of the minerals at the moment they are removed from the sea.

If the rules are approved, it could take about two to three years for countries to get permits to start seabed mining under draft rules now in place, Lodge said.

Canada's Nautilus Minerals had tried to mine seabeds for copper and gold in the national waters off Papua New Guinea, but it ran out of money. It asked for protection from its creditors earlier this year.

This has not stopped other companies, such as Global Sea Mineral Resources (GSR), part of the Belgian group DEME, and Canada's DeepGreen, from continuing tests and research.

In July, Greenpeace called for an immediate moratorium on deep sea mining to learn more about how it may effect sea ecosystems, but the ISA has rejected a moratorium.

exploitation – n. the act of getting value from something

draft – n. not the final version

moratorium – n. a time when a particular activity is not allowed

ecosystem - n. everything that exists in a particular environment