China Exploring the Many Benefits of Cockroaches

Update Required To play the media you will need to either update your browser to a recent version or update your Flash plugin.
By Ashley Thompson
16 December, 2018


Every day, around 50 tons of food waste arrives at a factory outside of Jinan, China. That is equal to the weight of seven adult elephants.

Once it arrives, the food waste goes through pipes and into individual cells made of wood.

There, about one billion cockroaches wait to feed.

People usually see these insects as dirty pests. But in China, they are seen for their environmental – and economic - value. 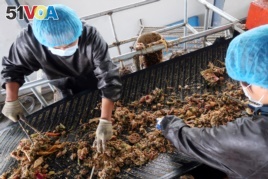 Ever-growing Chinese cities like Jinan are creating more food waste than they have room for in landfills. Cockroaches are not only able to get rid of food waste, they can become healthy food for farm animals. The insects' remains are even said to offer cures for stomach problems and other health issues in humans.

The food waste arrives at the Jinan factory before the sun rises. Shandong Qiaobin Agricultural Technology Co. operates the factory. It has plans to open three more next year, and hopes to process one-third of the food waste produced by Jinan's seven million people.

A recent spread of African swine fever led China to ban the use of food waste as food for pigs. But cockroaches that eat the food waste can become a protein-rich source of food for pigs and other farm animals.

Thousands of kilometers away, in a small village in Sichuan province, Li Bingcai has similar ideas.

Li, who is 47, used to sell mobile phones. He has invested one million yuan, about $143,000, in cockroaches. He sells them to pig farms and fisheries. He also sells them to drug companies, which use the insects in medicine. And sometimes, the cockroaches provide a tasty treat for his family.

"People think it's strange that I do this kind of business," Li said. "It has great economic value, and my goal is to lead other villagers to prosperity if they follow my lead."

His village currently has two farms. But Li's goal is to create 20.

In the Sichuan city of Xichang, a company called Gooddoctor has about six billion cockroaches. It claims it is the biggest cockroach farm in the world, and uses artificial intelligence, or AI, to both control and grow its roach population.

Cockroaches live for about six months. Once they die, the insects are treated with steam. Next, they are washed and dried. Then, the clean remains are sent to a huge nutrient removal container.

The extracts are then used in medicines that Gooddoctor produces.

The South China Morning Post recently reported that about 40 million people in China use Gooddoctor's cockroach extract to treat stomach problems and other sicknesses. The company sells to 4,000 hospitals around the country.

But, could the farm's six billion insects ever escape? Wen admits a mass escape would make for a good disaster movie. But he has taken steps to prevent that from ever happening.

"We have a moat filled with water and fish," Wen said. "If the cockroaches escape, they will fall into the moat and the fish will eat them all."

cell – n. any one of many similar sections that together form a larger structure

landfill – n. an area where waste is buried under the ground

prosperity – n. the state of being successful usually by making a lot of money

extract – n. a substance that you get from something by using a machine or chemicals

ulcer – n. a painful, sore area inside or outside the body

moat – n. a deep, wide ditch that is usually filled with water and that goes around the walls of a place