Update Required To play the media you will need to either update your browser to a recent version or update your Flash plugin.
By Mario Ritter
06 May, 2017


China has organized an alliance of Asian universities to compete with western educational institutions. The alliance will share resources and increase exchanges of students and teachers.

The new organization is called the Asian University Alliance (AUA). It was launched in late April at Tsinghua University in Beijing. The Chinese university was elected as chair of the group that includes a total of 15 universities from 14 countries and areas.

A goal of increasing ‘Asian wisdom'

China's Vice Premier Liu Yandong spoke at opening ceremonies at of the AUA on Saturday in Beijing. She said the new organization was important to China. 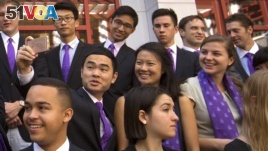 FILE - Members of the Schwarzman Scholars take a selfie as they line up for a group photo before a ceremony to officially open the scholar program at Tsinghua University in Beijing, Saturday, Sept. 10, 2016. (AP Photo/Mark Schiefelbein)

Liu said the educational alliance will provide "Asian wisdom to resolve regional and global problems. She added that the group will combine "outstanding global talents with an international perspective and to serve regional development."

The Indian Institute of Technology in Mumbai, King Saudi University in Saudi Arabia, United Arab Emirates University, Malaysia's University of Malaya and the University of Indonesia are also in the group.

People who attended the first board meeting of the AUA confirmed that Tsinghua University has offered to fund the organization with $1.5 million dollars. Members currently pay a fee of $5,000.

The goal of the group is to help Asian schools rise in the world rankings. The top universities in the world are mainly in western developed nations like the United States and Britain.

High rankings are important to attract research money from private business and international organizations. Rankings also help in attracting the best teachers and students from around the world.

Tan Eng Chye is Deputy President and Provost of the National University of Singapore. He said, "Ranking is invariably based more on research because, if you look at educational outcomes, it is harder to gauge."

He also said research spending is important. "And if you pool in a lot of money into research, then, I think, you will go up quite quickly (in the rankings)."

Tan said that governments should play an important part in funding research. Only five percent of the research has an immediate application, he said. So industry often does not want to support the other 95 percent that does not lead to new products immediately.

The desire to pool research and develop a greater exchange of students and teachers caused several Asian universities to join the AUA.

"This alliance will help us refocus on Asian universities in a lot of areas like student mobility, faculty exchange, and joint research," said Prasanna M. Mujumdar, director of IIT, Bombay.

China could gain from reducing its dependence on western institutions for high technology and it is looking towards Asian universities.

Some observers compare the move to China's creation of the Asian Infrastructure Investment Bank in 2014. The bank has increased China's leadership position in Asia and expanded its international influence.

Saibal Dasgupta reported this story for VOA News. Mario Ritter adapted it for VOA Learning English. Hai Do was the editor.

Rankings –n. a list of something ordered according to quality, size or some other characteristic

Gauge –v. to make a judgment about something

Pool –v. to combine money collected from others to be divided among the group