Update Required To play the media you will need to either update your browser to a recent version or update your Flash plugin.
By Mario Ritter
14 January, 2018


China and five Southeast Asian countries have set goals for developing the Mekong River area, but experts wonder if the group can succeed.

Leaders of the five countries met with Chinese Premier Li Keqiang in early January in the Cambodian capital, Phnom Penh. This was the second leaders' meeting of the Lancang-Mekong Cooperative. Lancang is the Chinese name for the Mekong.

The China-led cooperative was formed in 2015. All six countries on the Mekong River are part of the group. Other members are Cambodia, Laos, Myanmar, Thailand and Vietnam.

The Chinese premier said that his country would supply benefits to all the group's members. 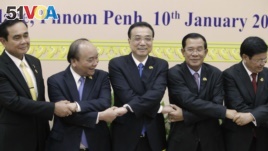 "We talked about important principles in the meeting," Li said. "We have to respect each other, and consider each other with equality for common development."

Cambodian Prime Minister Hun Sen told reporters about plans to create centers for improving water supply and environmental cooperation. He did not provide additional details of the five-year development plan, however.

On Thursday, China and Cambodia signed agreements to improve Cambodia's infrastructure, including a $2 billion deal to build a new expressway. Radio Free Asia noted that, in exchange, Cambodia promised to support China's goals, including its territorial claims in the South China Sea.

Yet the Lancang-Mekong Cooperative is not the first group to deal with Mekong River issues.

The Mekong River Commission (MRC) was formed to guide development on the river. The older group describes itself as an "inter-governmental organization" that works directly with Cambodia, Laos, Thailand and Vietnam "to jointly manage the shared water resources and the sustainable development of the Mekong River."

China is not a full member and not required to offer its proposals for dam projects to the group.

The MRC has been criticized for not doing enough to stop harmful projects on the river. But it is unclear if the Lancang-Mekong Cooperative, or LMC, will do better.

Some observers say the LMC is another plan to expand China's influence in Southeast Asia. China has pushed its Belt and Road initiative, a development plan for Asia, Europe and even Africa. Officials say their aim is to support cooperation and development in many of China's trading partners.

However, the six members of the LMC find it difficult to agree on their individual development projects. Countries downstream -- where the Mekong is widest -- are concerned that too many dams will hurt fisheries and reduce water flow.

In 2016, water levels in the Mekong Delta area were extremely low. The lack of water threatened Vietnam's rice crops. China agreed to increase the flow of water from dams in its territory, causing water levels to rise.

An important resource for Southeast Asia

The Mekong is Southeast Asia's longest river. It flows more than 4,000 kilometers from its beginnings in Tibet to its mouth in Vietnam. The Mekong is home to important fisheries. At least 60 million people depend on it for food. It also is important for transportation and energy.

China has reportedly built eight dams on the Mekong. The government has plans for at least 20 more.

Laos is building two dams and preparing a third, although MRC members have protested.

Maureen Harris is Southeast Asia director for International Rivers, an environmental group. She said communities in Thailand and Laos have reported problems linked to the dams for years, but nothing was done.

Harris said that, over the past 20 years, dams upstream have changed the natural flood-drought cycle of the river. She said they block dirt and other materials from flowing downstream and hurt ecosystems and fisheries.

A 2009 study warned about overdeveloping the river and its tributaries. The study was prepared for the Proceedings of the National Academy of Sciences of the United States of America. Researchers found that fish on the Mekong would decrease by half if all the proposed projects were built. These include 11 mainstream dams and 78 tributary dams.

Ian Baird is an associate professor at the University of Wisconsin. He studies river fisheries on the Mekong. He said LMC's members would like access to China's money, but gaining respect and cooperation in the area is more difficult.

"Are they willing to give up enough power and say (influence) to the other countries that will make them really want to support this initiative?" he asks.

He says it will take time to see how well the cooperative works.

David Boyle and Sun Narin reported this story for VOANews. Mario Ritter adapted their report for Learning English. George Grow was the editor.

benefit – n. a good outcome of some plan or activity

principles – n. guiding beliefs about right and wrong or behavior

manage – v. to direct someone or something

sustainable - adj. using methods that do not completely use up resources

upstream – adj. or adj. in the direction opposite to the flow of water

cycle – n. a process that repeats itself

sediment – n. soil that is carried away by water

ecosystems – n. environments and the life that depends on them

tributaries – n. rivers and streams that flow into larger rivers