China Meets with EU Over Trade as Economy Slows

Update Required To play the media you will need to either update your browser to a recent version or update your Flash plugin.
By Mario Ritter
16 July, 2018


A European Union (EU) official says the EU will not "gang up" with China against the United States, even if the trade group opposes America's protectionist policies.

Luca Jahier, the president of the European Economic and Social Committee, spoke before the yearly China-EU summit. The conference opened Monday in Beijing.

Jahier said he strongly opposes protectionism. But he added that increasing tensions with U.S. officials would not be the right answer. The South China Morning Post reported his comments.

The EU and Chinese officials met as China reported that its economic growth slowed a little in the three months ending in June. The Chinese economy grew at a rate of 6.7 percent, one tenth of one percent less than in the first three months of 2018.

Louis Kuijs is the head of Asia Economics at the Oxford Economics research group. Kuijs is based in Hong Kong. He told VOA that the slowing of China's economy has been more modest than many experts expected.

His group believes China's economy will expand 6.5 percent in 2018, with less growth expected for 2019.

However, Kuijs added that an important question is whether trade talks between China and the United States will restart. Kuijs said his group believes they will because of pressure from U.S. business groups and because China will be willing to make policy changes. 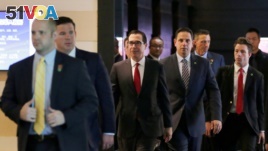 U.S. Treasury Secretary Steven Mnuchin (C) and the U.S. delegation for trade talks with China, leave a hotel in Beijing, China May 3, 2018. Talks between U.S. and Chinese officials have not yet restarted.

Some experts say it is unlikely that European countries will seek a united position against U.S. trade policies.

Similar to the U.S., the EU opposes what it considers unfair trade methods by China, especially those involving intellectual property rights.

Darson Chiu is a researcher at the Taiwan Institute of Economic Research. He said that the EU has problems only with the tariff measures announced by U.S. President Donald Trump.

Chiu added that China's ability to hit back at the U.S. through tariffs has limits. He said that China imports only $130 billion in American goods. So it would be difficult to answer a U.S. move to place a 10 percent tariff on an additional $200 billion in Chinese goods in two months.

Chiu also said that any effort to sell U.S. government securities held by China would only harm the country and its economy.

Raymond Yeung is an economist at the Australia and New Zealand Banking Group. He said the U.S.-China dispute could go beyond trade.

"The tension between the two countries is not simply on trade, but in anything that the Chinese government thinks happens to be in the U.S. economic interest," he said.

China has blamed the U.S. for trade tensions between the sides.

An editorial published in the state operated Global Times noted that China had "advantages in a protracted trade war." The editorial said the Trump administration was wrong in saying a trade war could be won easily.

However, China has made a strong effort to block comments about the trade dispute on the internet.

On Friday, the website freeweibo.com noted that the subject of the U.S.-China trade dispute was the second top-trending subject.

Joyce Huang reported this story for VOA News. Mario Ritter adapted it for VOA Learning English with additional materials from Victor Beattie and AP. George Grow was the editor.

gang up –v. to form a group to attack, oppose or criticize

modest –adj. not to a large extent

intellectual property –n. property such as inventions, research and media that carry rights for the owner to use, sell or gain from the property

beyond –adv. to a farther part of

editorial –n. a piece of writing in a newspaper or magazine that gives the opinion of its editors

advantages –n. something that helps to make something better, a good or desirable quality

protracted –adj. something that takes a long time, continuing longer than necessary