China Meets with Taliban as US Withdraws

Update Required To play the media you will need to either update your browser to a recent version or update your Flash plugin.
By Dan Novak
28 July 2021

Wang held the talks in the city of Tianjin. Mullah Abdul Ghani Baradar, a Taliban founder, led the visiting group. The Taliban leadership is seeking world political acceptance during a series of visits with national governments. 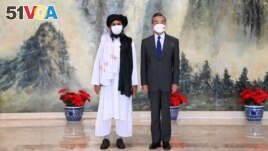 Wang told the group that China respects Afghan independence and territory. He also said he would not get in the middle of Afghanistan's own concerns.

Wang also commented on the withdrawal of American and NATO troops from Afghanistan, an operation to be completed August 31. The action demonstrates what Wang called, "the failure of America's policies and offers the Afghan people an important opportunity to stabilize and develop their own country."

China has for years objected to the U.S. military operation so close to its own territory.

Though no plan was announced for the meeting, China has an interest in making progress on peace talks and reducing violence. The Afghan government is in danger of losing large amounts of territory to the Taliban.

China and Afghanistan share a narrow border in the Wakhan Valley. China has signed deals for oil, gas and copper mining in Afghanistan, although those industries have long been inactive.

"The Taliban are a pivotal military and political force in Afghanistan and are expected to play an important role in the process of peace, reconciliation and reconstruction," Wang said.

Wang said China hopes the Taliban will put the nation's and the people's interests first and work to make peace.

Baradar's visit comes shortly after Pakistan's foreign minister and intelligence chief made their trips to China. Pakistan is seen as very important to peace in Afghanistan. The Taliban leadership is housed in Pakistan and Islamabad is trying to press the Taliban to talk peace.

The Tianjin meeting could be seen as a strategic move against the U.S. But Washington has also been working with China and Russia to push the Taliban to enter a peace deal.

Zalmay Khalilzad is America's top official working to end decades of war in Afghanistan. He also visited Pakistan earlier this month as relations between Islamabad and Kabul reached a new low.

Many believe the U.S. is stepping up efforts to make a peace deal before August 31 that also includes China.

U.S. Deputy Secretary of State Wendy Sherman met Wang in Tianjin on Monday. After the meeting, she and the State Department said Afghanistan was an issue of global importance that the U.S. and China could work together on.

reconciliation — n. the act of causing two people or groups to become friendly again after an argument or disagreement