Update Required To play the media you will need to either update your browser to a recent version or update your Flash plugin.
By Alice Bryant
02 January, 2017


Recently, dangerous levels of air pollution spread over several major cities in China. The problem shows that China has much to do to fight pollution. But China is also changing the way it deals with the problem.

In the past, local governments, including officials in the capital Beijing, would have denied the problem. But, during the recent period of smog, schools and some polluting factories were closed. Also, the number of cars permitted on city streets was limited. 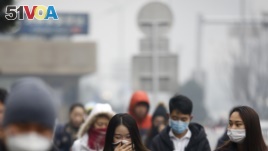 A woman uses a scarf and others wear masks to cover their face from pollutants as they walk along a street on a polluted day in Beijing, Tuesday, Dec. 8, 2015.

Recently, China's National People's Congress passed a new environmental tax. The tax affects polluters of air, water and solids. Noise pollution is also among the things that can be taxed. The new law aims to pressure polluters and give the government more enforcement power.

The law aims to deal with the failure of local governments to watch, enforce, and punish polluters. For nearly 40 years, China has been collecting fees from polluters. However, the system did not work well.

Yuan Ying works for the Climate and Energy Unit of Greenpeace East Asia in Beijing. She said a pollution tax is a good step.

She said the new policy will help cause local governments to make tougher rules for companies that pollute.

In the past, local officials from China's Ministry of Environmental Protection were responsible for collecting pollution fees and the system was easy to abuse. Earlier this month, state media reported that investigations this year have led to the punishment of more than 3,700 officials for not effectively protecting the environment.

For years, China has been criticized for not limiting pollution because of the effect it could have on economic growth. Critics of China include Peter Navarro, the man President-elect Donald Trump has appointed as the head of what he is calling the National Trade Council.

These critics argue that weak enforcement is unfair because China uses it to cut costs for its companies. These savings can make their products more competitive.

But, in recent years, public awareness and opposition has grown. Pressure to clean up the environment has increased. Chinese leaders see the problem affecting not only the country's water, soil and air, but social stability too.

Too little, too slow

The effect of the tax is not yet known. The new law does not take effect until January 2018.

Information released by state media shows that few companies will feel pressure to pollute less. For example, the tax on one ton of dangerous waste is about $144.

Coal mines and users are expected to pay less than one dollar for one ton of waste. And the cost for releasing one kilogram of the chemical sulfur dioxide is about 17 cents.

But officials say the increase in money received from the tax will be large. Last year, under the old system, officials collected $2.5 billion from about 280,000 polluters. The new tax law is expected to collect as much as $50 billion during its first year.

Greenpeace's Yuan Ying said that based on their estimates the current rate is still too low, especially for coal-burning power plants. She said the current cost to polluters is not enough to limit or pay for the environmental costs.

smog - n. fog mixed with smoke : a cloud of dirty air from cars, factories, etc., that is usually found in cities

microscopic - adj. able to be seen only through a microscope; extremely small

stability - n. the quality or state of being stable

power plant - n. a building or group of buildings where electricity for a large area is produced