Update Required To play the media you will need to either update your browser to a recent version or update your Flash plugin.
By John Russell
11 June, 2017

A Ministry of Environmental Protection, or MEP, statement says two-thirds of the companies inspected since April violated rules about pollutive gas releases.

The findings raise questions about the ability of the local and central government to deal with polluters.

The burning of coal, bad weather conditions and pollutive gas releases from factories may have created the environmental crisis.

Since then, the government has increased the number of inspection teams it deploys.

In March, the MEP said that 3,119 businesses of about 8,500 visited had falsely reported the gas waste they were releasing. In many cases, inspectors found polluters had restarted operations after being ordered to shut down.

Last month, state media reported that 5,594 businesses, or 66.2 percent of those examined by May 2, did not meet environmental requirements. The businesses were in 28 northern cities, across the Beijing-Tianjin-Hebei region.

The government's Xinhua news agency reported that small businesses and factories made up more than a third of the violators. It said this made enforcement difficult.

Some companies would not permit inspections.

In one case on March 12, four law enforcement officers were attacked while investigating illegal production at a textile factory in eastern Anhui province, the MEP said.

The years of enforcement efforts, growing protests over smog and months of warnings about inspections have led to a question: Why do companies continue to violate the rules?

Some observers say the central government has yet to make air quality a campaign issue.

Philip Andrews-Speed is an expert with the Energy Studies Institute of the National University of Singapore. He noted the success of China's five-year energy efficiency campaign that ended in 2010. He says there must be a similar campaign on air quality. 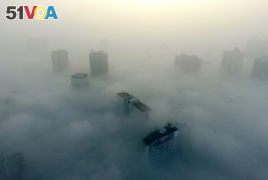 Xinhua has reported conflicting information about enforcement efforts. On May 12, it reported that MEP inspection teams have been ordering fines directly. Weeks later, Xinhua reported the ministry had asked local governments to halt the production of, or close, businesses that violated pollution rules.

But Andrews-Speed said local officials are unlikely to take such action. He said they have long been rewarded for favoring economic interest over environmental interest. They probably will not enforce the rules unless they believe their jobs are at risk as a result, he said.

smog – n. fog mixed with smoke : a cloud of dirty air from cars, factories, etc., that is usually found in cities

textile – n. a fabric that is woven or knit

efficiency – n. the ability to do something or produce something without wasting materials, time, or energy : the quality or degree of being efficient

reward – v. to give money or another kind of payment to (someone