Update Required To play the media you will need to either update your browser to a recent version or update your Flash plugin.
By Bryan Lynn
02 June 2021


China has reported the world's first known human infection with a rare form of bird flu.

A 41-year-old man from Jiangsu, in eastern China, was confirmed to have H10N3, Chinese health officials reported Tuesday.

No human case of this version, or strain, has been reported anywhere else in the world. Bird flu is found in different species of wild birds.

The infected man was treated in the hospital for about a month and was expected to be released soon, the National Health Commission said in a statement. 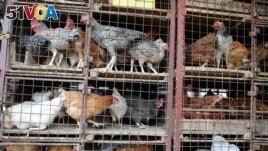 Chickens for sale are seen in cages at Kibuye market in Uganda's capital Kampala, as local media report the detection of bird flu or avian influenza in Kampala, Jan. 17, 2017.

The statement described the infection as "an accidental cross-species transmission." It added that "the risk of large-scale transmission is low."

The Health Commission did not provide details on how the man was infected.

Many different strains of bird flu are present in China and some end up infecting people, usually those working with poultry.

Officials said the man's contacts had been investigated and no other human cases of H10N3 were found.

Surveillance in place to watch for bird flu

The news comes as the world continues to deal with COVID-19, which scientists say likely jumped from animals to humans. COVID-19 is a form of coronavirus. But unlike with coronaviruses, there are worldwide surveillance systems in place to watch for human cases of bird flu.

The systems were established after a strain called H5N1 appeared in the late 1990s in poultry markets in Hong Kong. Between 2013 and 2017, another bird flu virus named H7N9 infected more than 1,500 people in China. That strain killed nearly 300 people. Those infected had close contact with infected chickens.

The World Health Organization (WHO) said in a statement to Reuters it remains unknown how the patient got infected with H10N3. "No other cases were found in emergency surveillance among the local population. At this time, there is no indication of human-to-human transmission," the statement said.

The WHO added that as long as bird flu viruses are spread in poultry, human infections will be possible. The new case in China, however, should serve as a warning "that the threat of a (flu) pandemic is persistent," the WHO said.

Filip Claes oversees the Food and Agriculture Organization's Emergency Center for Transboundary Animal Diseases for Asia and the Pacific. He told Reuters the H10N3 strain is "not a very common virus."

Only about 160 cases were reported in the 40 years to 2018, Claes said. He added that most of the cases were found in wild birds or waterfowl in Asia and some limited parts of North America. None had been discovered in chickens so far, Claes said.

flu – n. short form of the term influenza: a sickness that is similar to a bad cold, often causing a high temperature, tiredness and other symptoms

transmit – v. to cause a virus, disease, etc. to be given to others

poultry – n. chickens and other birds that people breed for meat and eggs

indicate – v. to show that something exists or is likely to be true

persistent – adj. continuing to exist for a long period of time

waterfowl – n. any bird that spends much of its life on or around water