Update Required To play the media you will need to either update your browser to a recent version or update your Flash plugin.
By Bryan Lynn
19 December, 2016


China says it will give back an American drone it seized Thursday in international waters in the South China Sea.

Military officials of the United States and China were holding talks on the return of the unmanned vehicle, a foreign ministry spokeswoman said Monday.

China's defense ministry said a Chinese naval ship observed what the ministry called "unidentified equipment" off the coast of the Philippines.

China says naval officials decided to take the object to make sure other ships could pass safely through the area. Chinese officials later discovered it was an unmanned underwater vehicle belonging to the United States.

U.S. officials have said the drone was operating in the area to collect scientific information related to water conditions and temperature. 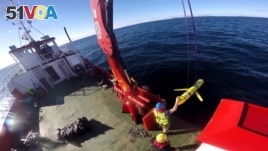 In this file photo, crew members aboard the VOS Raasay recover U.S. and British Royal Navy ocean gliders during an exercise off the northwest coast of Scotland, Oct. 8, 2016. U.S. defense officials say a similar unmanned vehicle was seized by the Chinese Navy in inter

U.S. officials have protested the incident. They say the seizure was unlawful. They have demanded the drone's immediate return. U.S. legal experts said the seizure happened inside an economic area belonging to the Philippines, possibly violating international law.

Arizona Senator John McCain, chairman of the Senate Armed Services Committee, told CNN Sunday the taking of the drone was a "gross violation of international law."

The United States and other countries have raised concerns about China's growing military presence in the South China Sea.

The Center for Strategic and International Studies (CSIS) reported the weapons included anti-aircraft and anti-missile systems.

China created the man-made land formation in the Spratly Islands in recent years by building up sand on top of coral reefs.

The Spratly Islands are made up of many small islands, coral reefs and other land formations in the South China Sea. China, Taiwan and Vietnam each have claimed much of the area and its natural resources. Malaysia, the Philippines and Brunei also claim parts of the waterway.

Ken Bredemeier reported this story for VOANews. Bryan Lynn adapted it for Learning English, with additional material from the Associated Press and Reuters. Mario Ritter was the editor.

seizure – n. act of taking something by force or violence

appropriate – adj. right or suited for a specific purpose