Update Required To play the media you will need to either update your browser to a recent version or update your Flash plugin.
By Mario Ritter Jr.
19 April 2022


China says it has officially signed a security agreement with the Solomon Islands.

The deal has raised concerns among observers in Australia, the United States and other countries. They are concerned about China's growing influence in the South Pacific Ocean area. 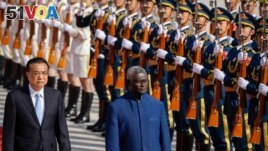 Australian Broadcasting Corporation reported that Wang said the purpose of the agreement is to "promote social stability and long-term peace and security" in the Solomon Islands. He said it would not target any third party.

An early version, or draft, of the agreement appeared on social media in late March. At the time, the Solomon Islands confirmed it was negotiating a deal with the Chinese government in Beijing. The draft included a provision that could permit China to send armed police and soldiers to the Solomon Islands. It would also let China base its navy ships off the coast of the islands.

The draft agreement led to concerns in Australia and the U.S. that China would establish a military base in the Solomon Islands. The island group is less than 2,000 kilometers from Australia.

Zed Seselja is Australia's minister for the Pacific. He traveled to the Solomon Islands' capital, Honiara, to ask Prime Minister Manasseh Sogavare not to sign the agreement.

Foreign Ministry spokesman Wang dismissed the concerns about the security deal in his announcement Tuesday. He accused the U.S. and Australia of "deliberately" increasing tension. He added that such efforts would fail.

Prime Minister Sogavare has said the agreement will not include the establishment of a Chinese military base.

The administration of U.S. President Joe Biden is sending a delegation to Honiara this week to discuss the agreement. The delegation will also discuss reopening a U.S. embassy there. The group is being led by Kurt Campbell, the White House Coordinator for the Indo-Pacific, and Assistant Secretary of State for East Asian and Pacific Affairs Daniel Kritenbrink.

The Associated Press reports that the U.S. delegation also plans to visit Fiji and Papua New Guinea on the trip.

promote –n. to help (something) happen, develop, or increase

provision –n. something that is done in advance to prepare for something else

deliberately –adv. in a way that is meant, intended, or planned