Update Required To play the media you will need to either update your browser to a recent version or update your Flash plugin.
By Bryan Lynn
19 February 2020


People in China are using apps on mobile phones to follow and perhaps help slow the spread of the new coronavirus, COVID-19.

Some of the apps provide the latest information about areas hit by the virus, while others collect data on infected persons.

The Chinese government is working with two of the country's largest technology companies to keep track of the disease. The two, Alibaba Group and Tencent Holdings, created color-based systems that record the health of individuals and identify carriers of the coronavirus.

Last week, Alipay, a payment app operated by Alibaba, released a system that uses colored QR Codes to show the health of people in the city of Hangzhou. A QR code is a sign a smartphone can read with its camera. Once the sign is recognized, the phone takes the user directly to an internet link with information about a subject. 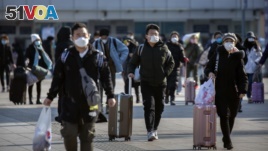 Users in Hangzhou can then complete an online form that reports their official identification number and seeks additional information. Individuals are asked to enter details about recent travel outside the city, as well as anything suggesting they might be infected, such as a high body temperature or strong cough.

After completing the questionnaire, users receive a mobile phone message. It includes a color-based QR Code that relates to the health situation they described.

Chinese state media said the Alibaba system would be deployed at train stations, along major roads and other travel checkpoints. They added that the system is also being used in some neighborhoods.

Two people living in Hangzhou told Reuters they were asked to show QR Codes when entering their apartment buildings. Another individual told the news agency that she was asked to show her QR code before entering the local supermarket.

Alipay said it was working with the government to expand the system nationwide.

The company said on Saturday the system is currently in use in the southern city of Shenzhen. Officials said they expected it to be deployed to other parts of Guangdong province soon.

Even before the latest systems were announced, many Chinese were already using mapping and travel apps in an effort to avoid areas with coronavirus infections.

One of the apps, developed by WeChat, uses official reports to identify places in the cities of Shenzhen and Guangzhou where coronavirus cases have been confirmed. Data mapping company QuantUrban created a similar system to track nine additional cities in Guangdong province.

One user of the apps told Reuters she finds the maps can provide "psychological comfort." The woman, who did not want her full name reported, said: "You can't guarantee there won't be fresh cases, but you can avoid an area that's already hit."

The technology website Abacus reported that citizens can request location data from their mobile phone carrier to show they had not been in affected areas. The report said that if requested, China's state-owned telecommunication companies will send users a message listing all the areas they had visited within the past 14 days.

Bryan Lynn wrote this story for VOA Learning English, based on reports from Reuters and online sources. George Grow was the editor.

data – n. facts and other information

app – n. a program for a smartphone or other electronic device that performs a special operation

track – v. follow the movements of a person or thing

code – n. a set of letters, numbers of signs that are used instead of words in order to keep a message hidden

cough – n. the act of expelling air from the lungs with a sudden, sharp sound

quarantine – n. to keep (a person or animal) away from others to prevent a disease from spreading

apartment – n. a set of rooms inside a building where people live

comfort – n. a feeling of pleasantness and being relaxed