Update Required To play the media you will need to either update your browser to a recent version or update your Flash plugin.
By Mario Ritter
12 August, 2015


China's highly controlled currency, the yuan, had its biggest drop in two decades Tuesday. That was followed, Wednesday, by a 1.6 percent drop in value. Chinese officials say their devaluation of the currency will let markets play a greater part in setting the value of Chinese money. However, experts say the devaluation also will help Chinese exports.

By Wednesday, markets reacted to news of the decline in the yuan's value. Stock market measures in Asia were down while stocks in the United States showed early losses.

The value of the Chinese yuan has been gradually rising for 10 years. Tuesday's fall was its biggest drop since 1994. The drop also took place days after China announced that exports had fallen in July by more than eight percent from the previous year. 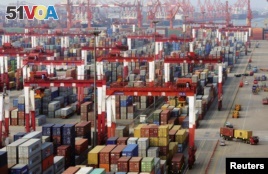 Shipping containers are piled up at the Qingdao port in Qingdao, Shandong province. A lower value to the Chinese yuan means Chinese exports are less costly.

Some experts say the recent volatility in the country's stock market also has played a part. The yuan has remained largely stable against the U.S. dollar for a year at a little over 6 yuan to the dollar. Other currencies, however, such as the Euro and Japanese Yen have weakened. That has put pressure on the yuan and hurt Chinese exports.

"If we look at the real effective exchange rate, which is against a basket of currencies that compose China's major trade partners, it's actually appreciated somewhere in the range of around 13 percent. So what that has meant is that, over the past year, exports from China to other countries besides the United States have become roughly 13 percent more expensive."

The People's Bank of China says it is trying to make the currency more market oriented. In the past, China would set a midpoint for trading each day based on a group of currency exchange rates. From that point, the value could go up or down by two percent, but in many cases, officials would intervene.

Now, the daily level for the range of trading is based on a group of major currencies and the value of the yuan at the close of trading the day before.

China's loosening of controls on its currency has led other nations in the area to do the same. One day after China changed its method of setting its currency value, Vietnam made a similar move. Glenn Maguire is chief Asia-Pacific economist at ANZ bank. He says other Asian governments may also want to weaken their currencies to remain competitive.

"If Thailand, Indonesia, Malaysia, Vietnam all decided they were going to win or gain market share by making their currencies significantly cheaper then it's the average citizens who pay the cost of that policy decision because they pay more for imported goods."

Mr. Liao says the People's Bank of China will continue to intervene in money markets since the Chinese yuan is still not freely traded. But, he says it is possible that the government will intervene less often.

Many in the U.S. Congress have accused China of keeping the value of its currency unfairly low to support its exports. However the U.S. Treasury has said it is too early to say what the changes will mean.

If China does let the market have more influence, the yuan might become a more international currency. China is seeking to get the International Monetary Fund to add the yuan to its Special Drawing Rights, a reserve of currencies that includes the U.S. dollar, Euro, Japanese Yen and British pound.

Bill Ide reported this story from Beijing. Mario Ritter wrote it for VOA Learning English. Caty Weaver was the editor.

Currency –n. the money of a country

Devaluation –n. to reduce the value of a country's money in relation to other currencies

gradually – adv. slowly over a period of time

volatility – n. likeliness to change in a sudden way

stable – adj. in a good state or condition; not easily changed; steady

oriented – adj. interested in or related to a thing, activity, etc...

midpoint – n. a point that is in the middle; halfway

reserve – n. a supply of something (in this case, money) that can be used at a later time