Update Required To play the media you will need to either update your browser to a recent version or update your Flash plugin.
By Mario Ritter
21 January, 2017


The head of China's largest online seller Alibaba does not think China and the United States will have a trade war despite comments from the Trump administration.

Jack Ma is the chairman of the Alibaba Group. At the World Economic Forum meeting in Davos, Switzerland, he said, "China and (the) U.S. will never have a trade war. Give Trump some time. He's open-minded, he's listening."

The Chinese billionaire said he would do all he could to prevent trade relations between the countries from getting worse.

Last week, Ma met with Trump at the Trump Tower in New York City. The Chinese billionaire is said to have discussed a plan to permit one million small U.S. businesses to sell goods on Alibaba's online shopping platform.

During the campaign and after winning the presidential election, Trump strongly criticized the Chinese government's support for its businesses. He blamed unfair trade policies for taking away U.S. jobs. And he said that China unfairly controls the exchange value of its currency, the yuan. 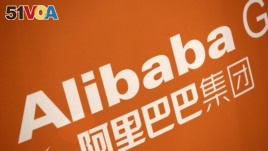 Trump also has threatened to place import taxes on goods from China and other countries in response to their trade policies.

According to the South China Morning Post, Ma said, "American international companies made millions and millions of dollars from globalization." He added that the U.S. should not blame the loss of jobs and companies on globalization.

However, a new study by an American business group says many U.S. businesses feel unwelcome in China. The companies say the cost of doing business in China is increasing. They add that rules and regulations are unclear or not enforced in a consistent way.

The American Chamber of Commerce in China led the study, which looked at responses from 462 companies.

William Zarit is chairman of the chamber. He says trade policies in China make it difficult for American companies. He says, "we feel that over the last few years that we've been taken advantage of to some extent, with our open market and the lack of open areas in the Chinese market."

Another major concern for U.S. companies in China is fake products. Fake products are copies of the originals that cost businesses with the legal right to sell them millions of dollars each year.

Ma defended Alibaba's efforts to fight fake products on its shopping platform. He said his company is doing all it can to fight the problem.

"Fighting against fake products is a war against human greediness," Ma said.

Bill Ide reported the story on American businesses in China. Mario Ritter adapted it with additional materials from Reuters and other news sources. Hai Do was the editor.

We want to hear from you. What do you think of globalization and U.S.-China trade. Tell us in the comment section.

despite –prep. without being prevented by

platform –n. a computer program that is used for a specific purpose, such as choosing and selling products

consistent –adj. not changing, happening in the same way

globalization –n. the process of making the trade of goods and services equivalent in all nations

originals –n. not a copy, the real or true product