Update Required To play the media you will need to either update your browser to a recent version or update your Flash plugin.
By Caty Weaver
28 October 2022


If the coronavirus pandemic had never happened, Feng-Feng Yeh might not have learned the full history of Chinese Americans in her hometown of Tucson, Arizona.

Yeh was a top chef, or cook, in New York City when pandemic-linked business closings ended her job and career plans. She decided to move back to her hometown. She also decided to revisit her passion for public art.

Looking for ideas, Yeh researched the history of Chinese immigrants in the Tucson area. On the Tucson Chinese Cultural Center website, she learned that Chinese family-owned food stores were a successful industry in the city beginning in the 1900s. 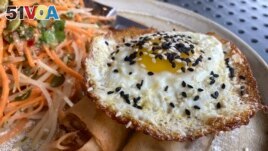 A vegan chorizo egg roll and a meat chorizo egg roll topped with a fried egg and a papaya and carrot slaw is served on Friday, Oct. 14, 2022 at BOCA restaurant in Tucson, Arizona (AP Photo/Terry Tang)

These food or grocery stores were more than just businesses. They were also lifelines for the area's Mexican American communities. The food stores - also called grocery stores- even started preparing Mexican chorizo. Chorizo is a ground and spiced sausage, or meat from a pig. It earned the nickname "Chinese chorizo."

Yeh said she was "very moved" by the alliance formed between Mexican and Chinese Americans. She described immigration policies set during the same period as "quite racist."

Chinese immigrants settling in Arizona were doing so under the 1882 Chinese Exclusion Act, the U.S. government's first race-based immigration policy. Both Chinese and Mexican immigrants faced racism even though they were critical members of the workforce.

Older Chinese Americans in Tucson say they have spent years trying to spread knowledge about this history.

Yeh proposed building a 3.4-meter-tall statue of two chorizo sausage links. She recently won financial support through the Tucson Museum of Contemporary Art and the Andy Warhol Foundation. In support for the project, she organized a celebration called Tucson Chinese Chorizo Festival. For the month of October, several local restaurants and food trucks have been serving specials with meat and vegan chorizo.

Even many locals do not know about Tucson's major Chinese presence.

The Tucson Chinese Cultural Center is a large space, at almost 1,400 square meters. It serves as a community center and museum. Established in 2005, it has a multipurpose room, large kitchen, classrooms, and a room with tables for playing the Chinese game called mahjong. The walls are covered with pictures and histories of long-gone Chinese grocery stores. The center also has a YouTube channel that includes a video on Chinese chorizo.

"A lot of people don't know we exist after 17 years. So, we've been trying to get the word out," said Susan Chan, the center's chief leader.

Starting in 1900, Chinese-owned grocery stores succeeded and became an economic force in Tucson. By the 1940s, there were 130 families running more than 100 grocery stores in the city. The number of stores dropped in the 1970s and 1980s as larger food stores moved in and young Chinese Americans sought other careers.

Allen Lew's father, Joe Wee Lew, opened his first of three stores in 1955. The stores were called Joe's Super Market. Allan Lew began working at the market around the age of 10. He remained in the business until the last store closed after 30 years in operation. He is now 74 years old and a longtime member of the center's board.

Lew and his four siblings grew up serving Mexican and Native American customers. Everyone felt like they "were all a big neighborhood family."

In fact, many Chinese grocers would let poor customers pay when they could. "A lot of them get paid like once a month, every two weeks, and they ran out of money," Lew said.

For the festival, Chinese-made chorizo is being celebrated with inventive dishes that combine Chinese and Mexican cultures.

A local meat store provided the more than 225 kilograms of meat and plant-based chorizo to restaurants for the festival. Yeh created the vegan recipe. She invited Jackie Tran, a Tucson food writer and owner of Tran's Fats food truck, to work on the real meat recipe.

Tran's family is Chinese and Vietnamese. He added spices to the meat including Sichuan pepper, coriander seed and Chinese five-spice powder.

For the statue, Yeh is partnering with Carlos Valenzuela, a Tucson-born artist of Mexican and Native American ancestry. Valenzuela's grandfather had had a credit account with a local Chinese grocery store.

If the idea of a chorizo statue brings a laugh, that is the way Yeh wants it.

"I think it's eye-catching for tourists to come and recognize that this town is a town that was heavily influenced by Chinese culture, which I don't think a lot of people know," said Yeh, who still needs more money to pay for the project.

What does Lew, the son of a Chinese grocer, think about the chorizo statue?

"That's great," Lew said. "I was surprised because I think when you grow up and you've done something all your life here, you don't think it's a big thing."

"But someone outside thinks, ‘This is different. This is neat.'"

museum – n. a building in which interesting and valuable things (as works of art or historical or scientific objects) are collected and shown to the public

customer – n. one that buys a product or service

recipe – n. a set of directions for making something, especially food

tourist – n. a person who travels for pleasure