Chinese Company to Sell Cars in US in 2019

Update Required To play the media you will need to either update your browser to a recent version or update your Flash plugin.
By Phil Dierking
18 January, 2018


A Chinese automobile maker wants to begin selling cars in the United States by the end of 2019.

The new car models will go on sale in China later this year. 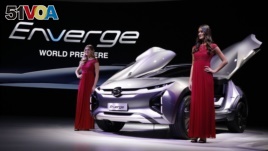 GAC says it is negotiating with its partner Fiat Chrysler about how to sell the vehicles in the U.S. The company says it already has two research centers and a design center in the U.S.

Davis Cole is an industry expert and chairman of the AutoHarvest Foundation in Detroit. The non-profit serves to connect industry inventors with each other and investors.

He said the quality of Chinese-made cars earlier was, in his words, "not up to what most people would expect here." However, he said there are clear signs of improvement. The new models show, he said, "much better quality and my guess is that as we look to the future, quality differences will probably disappear."

Cole said U.S makers who want to stay on top of the market now must consider former competitors more as partners. He noted Buick as an example. He said it sells about three times as many vehicles in China as in America.

In the U.S., GAC markets its cars under the name "Trumpchi." Cole said the name was interesting, in his words, "particularly with the criticism the president had of China and their vehicles... that just adds to the drama."

However, Trumpchi vehicles are already popular in China. In 2017, GAC sold 500,000 vehicles, which is 37 percent higher than the year before.

The company has said the name has no connection to U.S. President Donald Trump. It has been used by GAC since 2010.

This story was originally written for VOANews. Phil Dierking adapted this story for VOA Learning English. Caty Weaver was the editor.

Does China sell cars in your country? We want to hear from you. Write to us in the Comments Section or on 51VOA.COM.

drama – n. a state, situation, or series of events involving interesting or intense conflict of forces

sedan - n. a car that has four doors and that has room for four or more people.