Update Required To play the media you will need to either update your browser to a recent version or update your Flash plugin.
By Susan Shand
14 April 2020


An American research company says a dam in China on the Mekong River held back water while countries farther down the river needed water last year.

U.S. research company Eyes on Earth released its findings in a report. It said China was not suffering from a lack of rain at the time.

China's government rejected the findings. It said there was low rainfall over its territory during last year's monsoon season. 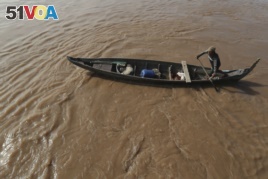 FILE - A Cambodian Muslim man rows his wooden boat where he lives along the Mekong River bank at a fisherman floating village located in Kball Chroy, near Phnom Penh, Cambodia, on Monday, Sept. 9, 2019. (AP Photo/Heng Sinith)

Eyes on Earth Inc. researches international water issues. Its study was financed by the U.S. government. The study could affect discussions between China and other countries on the Mekong River. The river supports 60 million people living on or near it. The Mekong runs for about 4,350 kilometers through China, Myanmar, Laos, Thailand, Cambodia and Vietnam.

Last year's drought saw the Lower Mekong at its lowest levels in more than 50 years. The lack of water hurt farmers and fishermen economically.

If Chinese officials are saying they did not make the drought worse for other countries, the information found "does not support that position," said Alan Basist. He is the president of Eyes on Earth.

The Upper Mekong flows through China's Yunnan Province. Satellite measurements of the area's ground wetness in 2019, suggest it had a small increase in rain and snow during that year.

Satellites also measured areas downstream from China along the border of Thailand and Laos. Water levels there were at times up to three meters lower than they should have been, the group said in the study.

That suggests China was "not letting the water out during the wet season," Basist said.

China has 11 dams on the Upper Mekong River. No one outside of China really knows the effects that these dams have on the flow of water. China has not released information about how much water the dams are using to fill their reservoirs. Eyes on Earth said those reservoirs can hold more than 47 billion cubic meters of water.

China does not have water treaties with the lower Mekong countries. But it has promised to work with other countries on the river to find the cause of last year's drought.

Starting in 2012, when the larger of China's upper Mekong dams opened, the flow of water to other countries changed.

"The explanation that China's dam building on the Lancang River is causing downstream droughts is unreasonable," the Ministry of Foreign Affairs said in a statement to Reuters. It calls the river the "Lancang," its Chinese name.

drought– n.a period with a severe lack of rain

data– n.information gathered to examine something