Update Required To play the media you will need to either update your browser to a recent version or update your Flash plugin.
By Christopher Jones-Cruise
30 April, 2017


American Mark Pavlyukovskyy created a company that provides materials people can use to build their own computer.

Last year, when he was searching for people to invest in his company, he wanted someone who knew the Chinese market.

Pavlyukovskyy did not have to travel to Beijing or Shanghai to find people knowledgeable about China. Silicon Valley in California is home to many Chinese with money to invest in small or start-up businesses.

Pavlyukovskyy was born in Ukraine. He now works in San Francisco. Last year nine people or groups invested $2.1 million in his company. One of the investors was a Chinese business based in Silicon Valley. 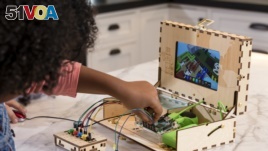 A child assembles an augmented reality computer kit created by Piper. A Chinese firm based in Silicon Valley helped fund the company. (Photo courtesy of Piper)

Pavlyukovskyy said he was not just searching for investment money, but for people with "expertise and knowledge of the education market in China."

His company, called Piper, sells parts for a computer that children can build. Each computer kit sells for $299. The company has sold its kits to schools in Hong Kong. More than 150,000 kits have been shipped around the world.

For the past 10 years, people and groups in Silicon Valley have invested in China as the country opened its markets and companies worked to expand there. But now Chinese companies are beginning to look outside China for places to invest.

Chinese investors have already had an effect on the American real estate, energy and transportation sectors. But they have only recently begun investing in technology companies.

Now, Chinese groups and individuals are investing in Silicon Valley companies. It may take longer for these deals to be profitable than in real estate, but there is a greater chance to make a lot of money.

David Cao was a computer programmer in Singapore before he launched an investment company in 2014. He says "this is the very beginning."

Chris Evdemon says many Chinese are investing in American companies because they believe more innovation is coming from the United States.

In 2014, Evdemon launched Sinovation, the American part of Chuangxin, a leading Chinese investor in start-up companies. He has now invested in 38 new companies that deal with such things as robotics and education technology.

Chinese investors are interested in companies specializing in technology to improve digital entertainment. They also would like to invest in robotics, artificial intelligence and technologies related to the financial, health and education markets.

The U.S. Department of Defense is worried that technology that could increase America's security may instead go to China. The department recently released a report about its concerns.

The report questioned whether China and Chinese investors in Silicon Valley were gaining use of important technologies through their investments.

Michelle Quinn reported this story for VOANews. Christopher Jones-Cruise adapted her report for Learning English. George Grow was the editor.

kit – n. a set of parts that are put together to build something

innovate – v. to do something in a new way; to have new ideas about how something can be done