The report, by a top official in Vietnam's central city of Da Nang, is being met with anger throughout the country.

Dao Tan Bang, a Communist Party chief in Da Nang, said 71 Vietnamese helped Chinese citizens buy 137 land lots along China Beach. The area is known to Vietnamese as My Khe. The size of the lots was unknown. 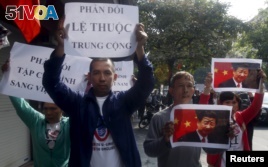 Protesters hold marked images of Chinese President Xi Jinping and anti-China signs during a protest ahead of his visit to Vietnam, on the street in Hanoi November 3, 2015. REUTERS/Kham - RTX1UHQG

Local officials consider the area important for security and defense.

Media reports in Vietnam say many Vietnamese citizens worry about China's territorial claims over the South China Sea. They are also angry about Chinese land purchases and the large number of Chinese workers in the country.

Da Nang officials this week expelled 64 Chinese workers, reports said. The government officials said the workers entered the country on tourist visas, but were working on construction of a luxury hotel.

The arrests are said to be the first step in a new effort to increase control over the growing migration of Chinese nationals to Da Nang.

Last year, China sent ships to rescue its citizens working in Ha Tinh after rioting targeted Chinese businesses and other foreign operations. That followed reports that China had placed an oil rig in disputed waters.

Social activist and Da Nang resident Truong Duy Nhat told VOA he has been investigating Chinese land purchases. He said Chinese give money to local Vietnamese to buy real estate. That land is controlled by the Chinese who financed the purchase.

Nhat adds that it is hard to prevent such sales.

The VOA Vietnamese Service reported on this story for VOANews.com. Bruce Alpert adapted this story for Learning English. Kathleen Struck was the editor.

Do you have an opinion about China expansion into Vietnam? Please leave a Comment below or post on 51VOA.COM, thank you.

luxury – adj. a condition or situation of great comfort, ease, and wealth

migration – n. to move from one country or place to live or work in another

We want to hear from you. Write to us in the Comments Section. Or share your views on Facebook Page.