Update Required To play the media you will need to either update your browser to a recent version or update your Flash plugin.
By John Russell
27 January, 2017


Chinese New Year is January 28 this year. To celebrate, millions will leave the cities where they work and travel home.

But this year, some Chinese workers are not going home. They are staying to protest. They say their employers have not paid them for their work.

Arguments over pay in China are common around the New Year, especially in traditional industries such as construction and steel. But these protests are different. This time, the protesters are unpaid workers from the new-economy industries. 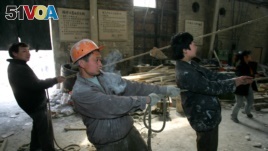 A migrant worker from Xi'an labors in a sculpture manufacturing company in one of Beijing's industrial neighborhoods Wednesday, March 30, 2005. Beijing announced the end of its rules limiting the life and work of immigrants Friday. While praising the loca

"New economy industries" refers to e-commerce, such as online sales and services.

China Labor Bulletin is a pro-worker organization and media outlet. The organization's Strike Map estimates that China has seen over 2,000 street protests about unpaid wages since February 2016.

It found that workers across China had already staged more than 130 protests in the month of December.

And it expects the number of worker strikes to grow in the next few weeks.

Zou Zhanhai and his fellow villagers from Hebei province are among those who are demonstrating. In September 2015, he and 21 others worked on an oil project. They are still missing the final payment of some 530,000 yuan, or about $77,000, from their employer.

Zou spoke to VOA from the city of Xi'an. He has been protesting since late December in front of the oil company's headquarters.

"We couldn't get by without this small amount of money, which hasn't arrived yet. Each of us has to work to support his family of five or six," Zou explained.

Despite the new regulations, Zou says public servants have not yet helped him:

"The employer now asks us to go home, saying that we will be paid after the Chinese New Year. But we can't keep taking their word for it. We plan to hold on to our protest unless we're paid. There's no other way but to spend the Chinese New Year here," he said.

Tien Yu could not be reached by VOA for comment.

China has tried to address the problem of unpaid workers in recent years by increasing regulations and oversight. Earlier this month, the State Council set a goal to end the country's wage situation.

Some of the increased regulations include jail terms and fines for company executives who are found guilty of not paying wages.

Government officials add that subcontracting has made holding employers responsible a difficult issue. And the current economic downturn does not help businesses survive, they added.

What Can Be Done?

Zou Zhanhai, the worker who is striking in front of the oil company, says the regulations are not resulting in him getting paid.

The government may be trying to help, he says, but government officials cannot seem to be able to enforce the measures.

Keegan Elmer is a labor researcher for China Labor Bulletin. Elmer also believes that the government's approach has not been effective.

Instead, he wants to stop the problems before they start. Elmer says workers should be able to use collective bargaining to manage their employers.

They should also be able to talk openly with their employers, he says, and understand how employers are doing business.

In short, he says workers and employers should have ways to solve these conflicts before they turn violent and dangerous.

unpaid – adj. needing to be paid

e-commerce – n. activities that relate to the buying and selling of goods and services over the Internet

regulations – n. an official rule or law that says how something should be done

oversight – n. the act or job of directing work that is being done

collective bargaining – n. talks between an employer and the leaders of a union about how much a group of workers will be paid, how many hours they will work, etc.