Update Required To play the media you will need to either update your browser to a recent version or update your Flash plugin.
By Mary Gotschall
31 January, 2016

The workers were lifted from a mine in Shandong Province Friday night. They were pulled up through emergency holes drilled in the ground to supply them with food and clothing.

The gypsum mine collapsed on December 25, trapping 29 miners. 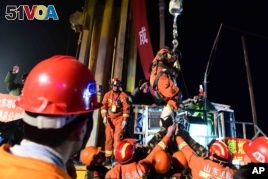 The first miner is lifted from a collapsed mine in Pingyi, east China's Shandong Province, Jan. 29, 2016. (Guo Xulei/Xinhua via AP) CHINA OUT

Fifteen miners have escaped or were rescued. One person was confirmed dead. Thirteen others are still missing and are believed dead.

Mary Gotschall adapted this story from VOANews for Learning English. Kathleen Struck was the editor.

Let us know what you think in the Comments section below, or on 51VOA.COM.

underground – n. located or occurring below the surface of the earth

drill – v. to make a hole in something with a drill or a tool used for making holes in hard substances

gypsum – n. a white mineral that is used to make plaster of paris