An ivory sculpture that was in the United Nations headquarters for 40 years is in a new home at the U.N. China mission in New York.

It may not come back to U.N. headquarters. The sculpture – and its uncertain future – show how international acceptance of ivory has changed.

The sculpture, or carving, was made in China in the 1970s from eight elephant tusks. The carving is a replica of China's Chengdu-Kunming railroad. In 1974, the People's Republic of China presented the carving to the U.N. in thanks for being made a permanent member of the Security Council. 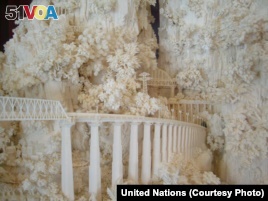 A detail of the ivory model of China's Chengdu-Kunming Railroad.

The U.N. General Assembly in New York City displayed the carving until 2013, when the U.N. was renovated.

Ivory carvings are still popular in China and Hong Kong, a Chinese U.N. staff member told VOA. He added that China is still a leading market for ivory.

But the market for ivory drives the slaughter of elephants. The Wildlife Conservation Society says ivory trafficking and poaching kills about 35,000 elephants a year. A recent National Geographic investigation shows how the ivory trade avoids laws by using militias and terrorists.

Ten years later, in 1989, only 600,000 elephants remained, according to the Great Elephant Census, an organization dedicated to keep an accurate elephant count.

That year, a majority of member states of the Convention on International Trade in Endangered Species (CITES) agreed to an international trade ban on ivory. The group aimed to stop poachers from killing endangered elephants, rhinoceros and walruses for their tusks.

The ban appeared to work – for a while. But, in 1997, CITES reduced the ivory ban for some countries.

Today, Africa has fewer than 250,000 elephants, says the David Sheldrick Trust in Kenya.

Chinese officials announced in May the country would crack down on illegal ivory. And Chinese President Xi Jinping announced during his visit to the U.S. last month that China would ban ivory imports and exports.

Former National Basketball Association star Yao Ming is a spokesperson in China for an anti-ivory and anti-poaching campaign. Actor Jackie Chan is also asking his fans to stop buying ivory.

But WildAid, an anti-trafficking group, says the Chinese are only talking and not acting enough to stop the ivory trade.

VOA's Mandarin Service reported on this story for VOANews.com. VOA's Carol Guensburg contributed to the report. Jim Dresbach adapted this story for Learning English. Kathleen Struck was the editor.

tusks – n. very long, large teeth that stick out of the mouth of some animals

poaching – v. to hunt or fish illegally; to catch or kill an animal illegally

renovated – v. made changes and repairs to a building

slaughter – n. the killing of a large number of people or animals