Update Required To play the media you will need to either update your browser to a recent version or update your Flash plugin.
By Dan Novak
25 September 2021

The restrictions limit children to just three hours of online game playing a week. That is one hour between 8 p.m. and 9 p.m. on Friday, Saturday and Sunday most weeks.

Li Zhanguo has two children ages 4 and 8. Even though they do not have smart phones, they enjoy playing online games.

"If my children get their hands on our mobile phones or an iPad, and if we don't closely monitor their screen time, they can play online games for as long as three to four hours each time," he said.

Like many other parents, Li is happy with new government restrictions. But experts say it is unclear if such policies can help prevent addiction to online games. Children might just get addicted to social media instead. In the end, experts say, parents should be the ones to set limits and support good practices.

There has been a growing concern in China about gaming addiction among children. Government reports in 2018 found that about one in 10 Chinese children were addicted to the internet.

The new rules are part of an effort to prevent young people from spending too much time on entertainment that Communist officials consider unhealthy. That includes what officials call the "irrational fan culture" surrounding celebrities.

"Adolescents are the future of the motherland, and protecting the physical and mental health of minors is related to the vital interests of masses," the Press and Publications Administration said in a statement. It is similar to a campaign by Chinese President Xi Jinping to create a healthier society for a more powerful China.

Under the new rules, the responsibility for making sure children play only three hours a day falls largely on Chinese gaming companies like NetEase and Tencent. Tencent's highly popular Honor of Kings mobile game is played by tens of millions across the country. 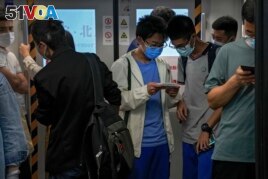 Companies have set up real-name registration systems to prevent young users from going past game time limits. They have used facial recognition technology to confirm their identities. And they have also set up a program that permits people to report violations.

It is unclear what punishments gaming companies may face if they do not enforce the restrictions. And even if such policies are enforced, it is also unclear whether they can prevent online addiction.

Tao Ran is director of the Adolescent Psychological Development Base in Beijing which specializes in treating internet addiction. He expects about 20 percent of children will find ways to get around the rules.

"...if you have a system in place to restrict them from gaming they will try to beat the system by borrowing accounts of their older relatives and find a way around facial recognition," Tao said.

Short-video apps such as Douyin and TikTok are also very popular in China. They are not under the same restrictions as games.

Barry Ip of the University of Hertfordshire in England has researched gaming and addiction. He said, "It's just as easy for a young person to spend four hours on TikTok in the evening rather than play games if their time is uncontrolled."

Li, the father of two young children, said he plans to start piano lessons for his daughter.

"Sometimes due to work, parents may not have time to pay attention to their children and that's why many kids turn to games to spend time," he said. "Parents must be willing to help children cultivate hobbies and interests so that they can develop in a healthy manner."

Zen Soo reported this story for The Associated Press. Dan Novak adapted it for VOA Learning English. Hai Do was the editor.

monitor — n. to watch, observe, listen to, or check (something) for a special purpose over a period of time

practice — n. something that is done often or regularly

irrational — adj. not based on reason, good judgment, or clear thinking

cultivate— v. to improve or develop (something) by careful attention, training, or study