Update Required To play the media you will need to either update your browser to a recent version or update your Flash plugin.
By John Russell
01 December 2022

The spacecraft Shenzhou-15, or "Divine Vessel," and its three passengers lifted off from the Jiuquan Satellite Launch Center on Tuesday, state television reported. 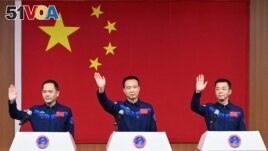 Shenzhou-15 was the last of 11 missions, including three previous crewed missions, needed to put together the "Celestial Palace" space station. The first mission was launched in April 2021.

The spacecraft docked with the station more than six hours after the launch. The three Shenzhou-15 astronauts were welcomed with warm hugs from the previous Shenzhou crew. The Shenzhou-14 crew members, who arrived in early June, will return to Earth after a few days.

The "Celestial Palace" is a sign of China's growth and confidence in space efforts. U.S. law banned China's military-connected space program from working with NASA and joining the International Space Station.

The mission also marks the high point of nearly 20 years of Chinese crewed missions to space. China's space missions with people began in 2003, when Yang Liwei went into orbit with Shenzhou-5.

Leading the Shenzhou-15 mission was Fei Junlong. He was among China's first group of astronauts in training during the late 1990s. His previous visit to space was 17 years ago as commander of China's second-ever crewed space mission.

Fei is joined by Deng Qingming and Zhang Lu. The three astronauts will live and work on the space station for six months.

The astronauts are called "taikonauts," named after the Chinese word for space. The next group of taikonauts will reach the station in 2023. The new taikonauts will come from scientific fields including biology, physics and chemistry, as well as biomedical engineering and astronomy.

During the space station's operation over the next 10 years, China is expected to launch two crewed missions to the orbiting station each year.

The astronauts are expected to do more than 1,000 scientific experiments - from studying how plants change in space conditions to how fluids behave in microgravity.

Ryan Woo and Liangping Gao reported on this story for Reuters. John Russell adapted it for VOA Learning English.

dock – v. to join together (two spacecraft) while in space

hug – n. the act of putting your arms around someone or something as a way of showing love or friendship

microgravity – n. the condition in which people or things appear to be weightless (conditions of weak gravity)