Update Required To play the media you will need to either update your browser to a recent version or update your Flash plugin.
By John Russell
29 June 2022


A Chinese spacecraft has taken images covering all of Mars after circling the planet more than 1,300 times since early last year, state media reported this week.

China's Tianwen-1, a spacecraft without people on it, reached the Red Planet in February 2021. It was the country's first mission there. A robotic rover has since been sent to the surface, while an orbiter studied the planet from space.

Among the images taken from space were China's first photographs of the Martian south pole. The south pole is where almost all of the planet's water resources are locked. 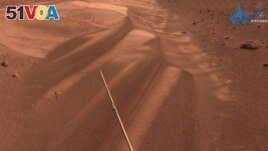 An image of Mars captured by Chinese rover Zhurong of the Tianwen-1 mission is seen in this image released by China National Space Administration (CNSA) June 29, 2022. (CNSA/Handout via REUTERS )

In 2018, an orbiter operated by the European Space Agency discovered water under the ice of the planet's south pole. Finding water below the surface is important for studying the planet's ability to provide for life. Such a finding could also be helpful for any human exploration there.

Other Tianwen-1 images include photographs of the Valles Marineris, a 4,000-kilometer long canyon, and an area in the north of Mars called Arabia Terra. It has many impact craters – holes in the ground caused by meteorites or other objects.

Tianwen-1 also sent back detailed images of the edge of the large Maunder crater, as well as a view of the 18,000-meter Ascraeus Mons, a large volcano first detected by NASA's Mariner 9 spacecraft more than 50 years ago.

Ryan Woo reported on this story for Reuters. John Russell adapted it for VOA Learning English.

canyon – n. a deep valley with steep rock sides and often a stream or river flowing through it

volcano – n. a mountain with a hole in the top or side that sometimes sends out rocks, ash, lava, etc., in a sudden explosion (called an eruption)