Update Required To play the media you will need to either update your browser to a recent version or update your Flash plugin.
By Mario Ritter
05 August, 2018


Civita-di-Bagnoregio is an ancient Italian village about 120 kilometers north of Rome. It was built on a flat area of volcanic rock, high above the Tiber river valley.

Civita is known as a "dying city," with a year-round population of just seven. For many years, people there had long believed that the world economy had passed them by. They had become used to seeing their young people leave for jobs in other places.

But a wave of tourists – mostly from China – is helping the town's economy. This year, Civita expects 800,000 visitors. 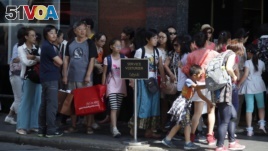 The most popular countries to visit among Chinese tourists are Britain, Italy, France, Germany and Spain.

Eurostat, the European Union's statistics agency, says Chinese tourism in Europe has increased by 200 percent in the past 10 years.

Those numbers are expected to increase this year, which has been named China-EU Tourism Year. The marketing effort was jointly launched by the European Union and China.

Europeans are both pleased with and concerned about the growing number of visitors. The increase has stressed some European airports and is adding to development issues in some areas.

Some observers have different concerns.

Stratfor, an American research company, has called Chinese tourism an "unexpected tool" that China can use to "exert its influence."

The group added that the huge rise "in the number of outbound Chinese travelers means their combined economic weight can have sharp consequences."

Stratfor also said the Chinese government's ability to give countries "Approved Destination Status" is a way to control where Chinese tourists can and will go.

That is how the government greatly reduced the number of Chinese people traveling to South Korea last year, Stratfor noted. Experts saw the move as an effort to punish South Korea for deploying an American-made missile defense system that the Chinese government opposed.

The European Union, however, sees the rise in Chinese visitors as important to the economy. The EU Commission said, "Tourism has the potential to contribute towards employment and economic growth, as well as to development in rural...areas."

Forty-five-year-old Roberta Mencarelli oversees a bed-and-breakfast hotel and restaurant in Bagnoregio, a few kilometers west of Citvia-di-Bagnoregio. She said that most of the visitors to the area are Chinese. "They have brought money into the town and the tourism has increased the energy here," she said.

It has also increased the number of businesses. "There used to be only two restaurants in town," she said. "Now there are 10."

Mencarelli said she has even begun learning some Mandarin Chinese to help her communicate with visitors.

The increase of visitors has brought much more money to the small number of people who live in Civita.

Not everyone is happy about it. An old woman who gave her name as Giovanna described the inflow as an "invasion."

Her complaint is similar to those heard in some of Europe's most famous cities like Venice, Barcelona and Paris. Critics say they are already overcrowded during the tourist season. They say the additional waves of visitors from China and other Asian countries have hurt the quality of life of local people and strained infrastructure.

Wolfgang Arlt is director of the China Outbound Tourism Research Institute (COTRI). He wrote in a recent blog entry that there is a "growing number of – sometimes violent – protests" by local people in some places popular with travelers.

Only seven percent of Chinese citizens have passports, compared to 40 percent of Americans. That means, industry experts say, that the possibility for even more growth in Chinese tourism is huge.

Arlt's research group says the number of trips taken by Chinese travelers will increase from 145 million in 2017 to 400 million by 2030. If those numbers are correct, then Chinese would make up one-fourth of world tourism by that year.

tourist –n. someone who travels for pleasure rather than business

exert –v. to use strength, to cause something to happen

consequences –n. the results of an action

potential –n. the chance that something will happen or exist in the future

contribute –v. to give, to cause something to happen

strain – v. to cause problems or stress from too much use

infrastructure –n. the structures and equipment that nations or areas need to operate such as roads, airports, railways and power centers