Update Required To play the media you will need to either update your browser to a recent version or update your Flash plugin.
By Jonathan Evans
14 July 2022


The coronavirus pandemic left makers of personal computers, smartphones, and cars without the computer chips needed to make their products.

That suddenly changed during a period of three weeks from late May to June. High inflation, China's latest COVID restrictions and the war in Ukraine have reduced consumer spending -- especially on computers and smartphones. 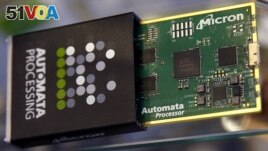 Worries about an industry recession have severely affected computer chip stocks. The Philadelphia Semiconductor index has fallen 35 percent so far in 2022. That is far more than the S&P 500's 19 percent loss.

Hoarding is making the situation worse. Hoarding is the practice of collecting or storing a large amount of something. Many manufacturers stored a large number of computer chips during the pandemic.

Before that, those manufacturers ordered parts as close to production time as possible to avoid having extra supplies and to reduce storage space and spending.

Industry executives and experts cannot say how many surplus chips are in storerooms around the world. But industry expert Mark Lipacis said supply numbers for the first three months of 2022 hit a record high at major electronics manufacturing services companies. The earlier record was over 20 years ago.

Manufacturers may decide to use up chips in storerooms instead of buying new ones, and cancel orders, Lipacis warned.

Some experts said automobile chipmakers are safe for now. But that may not last long.

That will create a problem when vehicle makers stop buying chips to use up their current supplies.

consumer – n. a person who buys and uses up goods