Update Required To play the media you will need to either update your browser to a recent version or update your Flash plugin.
By Susan Shand
27 March, 2019

Officials and aid workers are still struggling to provide clean water and sanitation, as well as help hundreds of thousands of people who lost their homes.

Ussene Isse is the national director of medical assistance. 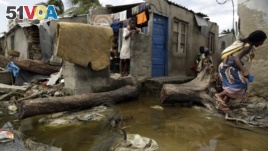 A woman carrying a baby on her back jumps as she tries to avoid stepping on the dirty water in Beira, Mozambique, Wednesday, March 27, 2019. (AP Photo/Themba Hadebe)

"You know, cholera is an epidemic situation," he said. "When you have one case, you expect to have more cases in the community."

Cholera is a major problem for cyclone survivors living in crowded camps, schools, churches and other places where there are still flood waters. The disease is spread by contaminated food and water. It causes severe diarrhea and can kill within hours. It can be treated with different types of rehydration.

The World Health Organization has warned of another disaster if cholera spreads throughout the area. On Tuesday it said 900,000 cholera vaccines were expected to arrive later this week.

Health workers were opening clinics across Beira, the center of aid operations for the area.

Some people in the city have started to drink standing water by the side of the road. Doing this increases the chances of diarrhea, the medical charity Doctors Without Borders said.

The aid group said it has seen hundreds of cases of severe watery diarrhea in the past few days. Gert Verdonck is the group's emergency official in Beira.

He said, "Extreme damage will likely lead to an ... increase of waterborne diseases, skin infections ... and malaria in the coming days and weeks."

Efforts to help are continuing

Workers are continuing their efforts to get clean running water to Beira. The United Nations children's agency said parts of the city's water supply system were working again. It said there was "water running in 60 percent of the pipes." The government also was operating water trucks.

Aid operations continued to explore ways to send aid to the city, which is reachable only by air and sea. There has been no contact with some small communities beyond the city.

Aid groups continued to arrive in Mozambique. The United Nations has asked the international community to give $282 million to the country for the next three months.

The U.N. refugee agency announced that its first aid flight had landed in the country's capital. The agency plans to send supplies to Beira immediately.

Two other flights are planned for Zimbabwe and Malawi this week.

In a televised speech to the nation, Mozambican President Filipe Nyusi said Pope Francis will visit the devastated country in September. The Pope's visit will help the nation "rebuild," Nyusi said.

President Nyusi last week estimated that 1,000 people had been killed. The number could be higher as floodwaters leave and more bodies appear, some emergency workers have said. The true number of dead may never be known.

The cyclone had winds of up to 240 kilometers an hour and destroyed whole villages.

One resident told The Associated Press, "The cyclone destroyed everything we built for more than 100 years."

The Associate Press reported this story. Susan Shand adapted it for VOA Learning English. Kelly Jean Kelly was the editor.

contaminate - v. to make (something) dangerous, dirty, or impure by adding something harmful or undesirable to it

diarrhea - n. an illness that causes you to pass waste from your body very frequently and in liquid rather than solid form

rehydration - n. the process of returning water to the body