Choose Native Plants for Your Garden

Update Required To play the media you will need to either update your browser to a recent version or update your Flash plugin.
By Anna Matteo
02 May 2022

Jessica Damiano moved into a new home in the spring of 2005. At the time, the only plants growing in the garden were a rhododendron bush, a few daffodil flowers, and some ferns.

A month later, she was delighted to see a flowering plant start to grow. She did not know the name of the beautiful purple plant. But that did not matter to her. She loved it! 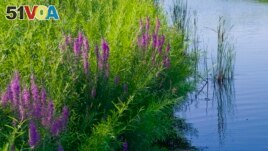 That is when she found out the truth.

She discovered that her favorite plant was called purple loosestrife and that it was considered "invasive" in her home state of New York.

However, she told herself that the plant was not spreading on the property and that it was not out of control.

Then she learned more.

Some plants known to be invasive are what Damiano calls "wolves in sheep's clothing." This means they may seem harmless and well-contained in the garden but become harmful in other places.

Birds eat the seeds of invasive plants and spread them to other places. Those seeds grow into new plants that outgrow native plants. Damiano said this is because invasive plants often are not eaten by local wildlife, which would otherwise keep them under control.

If not controlled, invasive plants grow larger and push out native plants that provide food and shelter for birds, insects, and small animals. This harms the local environment.

Many state environmental agencies ban the sale and use of plants found to be harmful to human or ecological health. But some invasive plants are not officially considered invasive. Others may be listed as invasive in one area but not another. And some invasive plants continue to be sold in stores.

So, what is a gardener to do?

Damiano says to avoid any plants sold as "vigorous," "fast-spreading," "quick-climbing," or a "rapid self-sower." She warns that these are all sellers' code words for invasive plants.

Next, learn about your local area: Which plants are invasive? And which plants are native? Ask government agencies, universities and colleges, and environmental groups. You can also do your own research at libraries or online.

In the end, Damiano says she pulled the purple loosestrife from her garden. The U.S. Environmental Protection Agency warns that the plant "clogs rivers and lakes." It also grows "...so thick that boats and swimmers can't get through." It also destroys food and habitat for fish and water birds.

She replaced that plant with the native and equally beautiful blazing star plant. This plant has been growing happily without problems in her garden for the past 15 years.

garden –n. an area where plants are grown

bush –n. a usually low shrub with many branches

graduate –v. to finish a course of study : become a graduate

ecological –adj. related to the science of understanding the relationship between groups of living things and their environments

self-sower –n. a plant that spreads its seeds by itself without the help of animals such as birds

clog –v. to block a narrow passage such as a pipe or street