Health Effects from Smoking are Deadly

Update Required To play the media you will need to either update your browser to a recent version or update your Flash plugin.
By VOA
28 June, 2014

A report earlier this year from the United States Surgeon General finds that smoking tobacco is even deadlier than had been known. The report says smoking causes birth defects -- a leading cause of death among babies. It also links smoking to cancer of the liver and colon, diabetes and other diseases. The first US surgeon general's report on tobacco and health was released in 1964. It was the first scientific report to link smoking with lung cancer and heart disease.

"If we're going to work together to achieve a society free of tobacco-related disease, this must be understood."

The report urges increased use of tobacco-control measures. The suggested controls include raising prices of cigarettes and expanding bans on smoking in enclosed spaces. 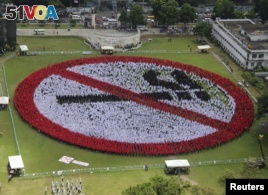 The 2014 report calls for research on whether lowering the amount of nicotine in cigarettes could help people stop smoking. It also contains new findings.

"Today we know that smoking is a cause of diabetes, rheumatoid arthritis, and poor response to treatment of arthritis, erectile dysfunction, an increased risk of tuberculosis, disease and death. We're adding colon, rectal and liver cancer to the long list of cancers caused by smoking."

Dr. Lushniak also said smoking suppresses the body's natural defenses for fighting disease. He said this increases a smoker's likelihood of getting an infectious disease.

"One of the most disturbing findings is that the disease risk from smoking by women have risen sharply over the last 50 years. Women are now as likely to die from smoking as men. Women smokers' risk of lung cancer is now the same as men, and more women die from chronic lung disease than men."

The 2014 report finds that those who do not smoke are at a higher risk for stroke if left unprotected from tobacco smoke.

The latest research also shows damage to unborn children. Babies are more likely to be born with cleft palates if the mother smokes. The chemicals in tobacco smoke can have lasting effects on brain development in a fetus.

The surgeon general would like to see more action to keep young people from developing a smoking habit. He supports higher prices on cigarettes, more anti-smoking media campaigns, and more help for people who want to quit smoking.