'Cinderella' Is More Than Just a Movie for Kids

Update Required To play the media you will need to either update your browser to a recent version or update your Flash plugin.
By Caty Weaver
18 March, 2015


Years ago, the American writer Kurt Vonnegut often said there was one story that would always make a million dollars: Cinderella.

In Hollywood and in today's economy, it is more like $70 million and that is just a start.

"Cinderella" made that amount in ticket sales when it opened last weekend. But the merchandising deals linked to the movie are also hugely valuable. Reviews of the movie were mixed. Steven Rea of The Philadelphia Inquirer called the film "a winning re-do." Richard Corliss of Time magazine wrote that "Disney finally got Cinderella right." Other critics were not as happy with the film. Sara Stewart of the New York Post suggested the story-telling lacks substance. She wrote, "this Cinderella is all dressed up with nowhere very interesting to go."

So the artistic success of the film is open to debate. What is clear, however, is the movie's business success. It is a hit in the theaters but it is also a hit in retail. And Disney widened its usual market for "Cinderella" products. 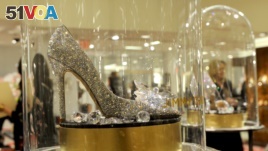 A Jimmy Choo shoe, glass slipper from "Cinderella," is for sale exclusively at Saks Fifth Avenue in New York, March 9, 2015.

There are products connected to the Disney film targeted not only at little girls, but women, too. For example, the famous shoe designer Jimmy Choo partnered with Disney to create a version of Cinderella's "glass slippers" or shoes. You can buy them for about $5,000. At that price, you would not want to lose one at the ball, even if that is the way you get your prince. Several other shoemakers also accepted Disney deals to design versions of the famous footwear.

The makeup company MAC quickly sold all its products with official links to "Cinderella." But lucky buyers were soon selling the products on the online marketplace eBay for many times the original price.

HSN is a popular television and online retailer of jewelry, clothing and objects for the home. The marketer is now an exclusive seller of "Cinderella" products.

So, is there anything left for the children, those people we think of as the traditional audience for the age-old fairytale? Yes, you can find toys and other children's products at the American retailer JC Penney. Of course, you can also visit a Disney store.

Disney also produced an animated version of "Cinderella." It came out in 1950 and is considered a classic. Which do you think the Disney company does best: live action or animated films? Post your thoughts in the comments section.

Caty Weaver wrote this story for Learning English. ­­­­­­­­­­­Hai Do was the editor.

merchandising – n. the activity of selling products that are related to something (such as a television show, movie, or sports team) in order to make more money

retail – n. the business of selling things directly to customers for their own use

original – n. a document, film, painting, etc., which is created by someone and from which a copy or translation is made