Update Required To play the media you will need to either update your browser to a recent version or update your Flash plugin.
By Dan Friedell
13 June 2021


More than one year into the COVID-19 crisis, many people are used to doing their jobs from home. Many businesses are thinking about permitting employees to continue to do so even after workplaces reopen.

As a result, lots of people are considering leaving large cities to live in smaller towns.

A property company called Common is working with these small towns to come up with a new kind of apartment building that will appeal to people who work from home. They are known as teleworkers or "digital nomads" because they can work from anywhere.

Matt Micksin is a local director of Common, which develops and manages co-living properties. He says it has found that people want apartment buildings that include office space outside of the individual homes. After all, sometimes people do not want to work in the same rooms where they eat their meals, or sleep, or watch movies, especially if they already share that living space with others.

So, Common has begun to design co-living complexes that include business centers, small offices and other workspaces.

Common asked some of America's smaller cities to propose some development sites for the complexes. Some of the cities are places that began to fail following the loss of one major employer or the closure of a big factory. Populations would drop as people moved away to larger cities for work.

Now these smaller towns want people to come back.

The only large city among Common's final group of five development sites is New Orleans, Louisiana. It is known for its Mardi Gras parades, great food, music and a large indoor football stadium. However, it is not known as being a place where young people who work in technology want to live.

Micksin thinks Common can change that by building workspaces.

Micksin said places like Bentonville and Ogden are appealing to people who want to be outside. Bentonville has fishing and forests, and Ogden is close to mountains where people like to ski. 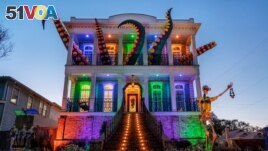 New Orleans, Louisiana is known as a place to celebrate Mardi Gras and eat great food, but not as a technology hub. File photo - February 7, 2021.

"People are prioritizing what type of lifestyle they may want," he said.

It can be hard to do those outdoor activities while working in a large city, Micksin noted. But if you live in a small town on the edge of a mountain, you can walk right out your door and enjoy such offerings even at the end of the workday.

Micksin said that if people can work from "anywhere," they might be happier working in a quiet, private place close to their living space instead of inside that space.

"We've all seen plenty of Zoom calls that were coming from someone who didn't have an ideal setup," he said.

Some of the cities chosen for Common developments have old, interesting buildings that could be changed into spaces where people can live and work.

For example, the Rocky Mount proposal calls for adding to a 10,000 square meter cloth making factory that closed in 1996. The former factory already has offices and places to eat. Now it could have people who live and work in the same building.

Evan Covington Chavez works for Capitol Broadcasting Company, which manages the old cotton factory. He said his company's group of buildings would be good for people who want to be "plugged in" to local events and meet people who are of a similar age and work background. He said coffee shops and other meeting places would be right outside the door of a home.

"You never have to hop in your car," he noted.

Bentonville has a population of about 60,000. The proposal for that city praised its outdoor activities and arts and culture offerings.

Micksin said the key to the success of these new spaces is that they provide both "comfort" and "flexibility" but are not costly.

Common hopes building on the first sites will begin in late 2021.

Dora Mekouar wrote this story for VOA. Dan Friedell adapted it for Learning English. Caty Weaver was the editor.

Would you want to move to a small city in the U.S. if you could live anywhere? Tell us in the Comments Section and visit 51VOA.COM.

prioritize - v. to make (something) the most important thing in a group

plugged in –adj. used to describe a person who is connected and up-to-date

flexible- adj. able to change or to do different things