Update Required To play the media you will need to either update your browser to a recent version or update your Flash plugin.
By Pete Musto
24 June, 2018


Hundreds of amateur "citizen scientists" have begun studying the Pacific Northwest area of the United States. They are seeking to learn more about the nearly 30 species of bumblebees that live there.

Bumblebees are important for the growth of wild and agricultural plants. They help spread the substances that make it possible for flowers to reproduce through the process known as pollination.

But some bumblebee species have disappeared from the places where they were once common. 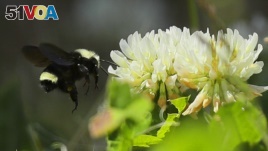 A bumblebee flies near clover flowers in Olympia, Washington.

The new, three-year-long research effort is known as the Pacific Northwest Bumble Bee Atlas project. Organizations in Idaho, Oregon and Washington are working together as part of it.

Researchers hope to collect enough information to suggest ways to protect bumblebees and their habitat.

Ann Potter works with the Washington Department of Fish and Wildlife. She told the Associated Press it is important for humans to study honeybees – "the little guys that make the world go around."

Rich Hatfield works with the conservation group the Xerces Society. He noted that there is growing interest in returning the habitats for pollinators to their earlier, healthier conditions.

The project's leadership is sending citizen scientists to selected one-hectare sites. They will have tools to capture insects, as well as plant and bee guides. The amateur researchers will also have a special application, or app, on their smartphones. The app makes it so that findings can be recorded, photographed, mapped and sent to a central database.

Researchers say a little more than 200 people have agreed to visit 400 sites through the end of August. Hatfield said more volunteers are needed, especially to work in more difficult-to-reach areas.

For the study, the bees are captured and put in a low-temperature container so that they go into a sleep-like state. Photos are taken that examine the condition of the bees. The bees are then released unharmed once they warm up.

Unlike honeybees, bumblebees do no spend the winter living in their self-made structures known as hives. Instead, they usually spend the winter in holes in the ground. There are usually only a few hundred individual bumblebees left alive by the time fall arrives. Any honey they produce they eat.

When winter begins, all bumblebees die except a few pregnant queen bees. In the spring, those queens head out alone to start a new structure to live and produce worker bees in, beginning the process all over again.

Andony Melathopoulos is with Oregon State University. His research interest centers on this period of bumblebees' lives when they live alone.

"Here's a species that spends a big part of its life as a vulnerable queen," he said.

Honeybees first came to the United States from Europe. People brought them in order to help with the pollination of their crops.

But when it comes to native North American plants and some crops, bumblebees are much more useful. They are much stronger and can hold onto an entire flower, shaking loose the necessary substance for plant reproduction. For some plant species, the bumblebee is the only insect strong enough to do so.

The Western bumblebee was once considered common and widespread. But it has since disappeared from many of the areas it once lived in. And experts for the current study are hoping to find reasons for the sudden decrease in Western bumblebee populations.

Ross Winton of Idaho Fish and Game admitted that scientists do not know much about bumblebees.

"The more we learn, the more concerned we get," he added.

In the end, the Pacific Northwest Bumble Bee Atlas could be an example for other states interested in learning more about how their bumblebee populations are doing.

Melathopoulos said, "I think everyone is looking at the Pacific Northwest and this initiative as a test case."

The U.S. Fish and Wildlife Service is paying for the research done in Idaho and Washington. In Oregon, another government group called the Foundation for Food and Agricultural Research is providing financial support.

Keith Ridler reported this story for the Associated Press. Pete Musto adapted it for VOA Learning English. Ashley Thompson was the editor.

What do you think is affecting the bumblebee populations in the United States? What effect will that have on the rest of the environment? Write to us in the Comments Section or on 51VOA.COM.

amateur – adj. describing a person who does something such as a sport or hobby for pleasure and not as a job

pollination – n. the process of moving the very fine, usually yellow dust that is produced by a plant for reproduction to another plant

smartphone(s) – n. a mobile telephone that can be used to send and receive e-mail, connect to the Internet and take photographs

hive(s) – n. a place where bees live and usually lay eggs or take care of their young

honey – n. a thick, sweet substance made by bees