Update Required To play the media you will need to either update your browser to a recent version or update your Flash plugin.
By Bryan Lynn
27 September 2021

Leaders in cities say the rule could hurt some urban communities that also want financial help to upgrade their internet services.

The money is part of a $350 billion government aid program for state and local governments to help them recover from the coronavirus crisis. The U.S. Treasury Department approved use of the aid for expanding and improving high-speed internet services.

But a government rule sets eligibility requirements based on internet speeds. To receive assistance, communities must have internet upload speeds below 25 megabits per second (Mbps), and download speeds under 3 Mbps. The U.S. Federal Communications Commission defines high-speed internet – also known as broadband – as being above these speeds. 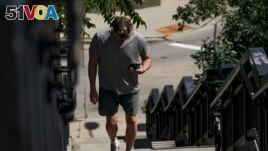 The Treasury rule is aimed at providing financing to remote, rural areas that have slow or no internet service. But officials in cities believe the eligibility requirements do not pay attention to their internet needs. They say that although city areas have broadband available, internet speeds may not be fast enough to meet local demands.

For example, some broadband speeds in cities might not be fast enough to permit a whole family to work, study and watch video at the same time, these officials say. Such a need became very common in U.S. households during the coronavirus pandemic.

Detta Kissel is a retired Treasury Department lawyer who used to write agency rules. She now works on efforts to expand broadband services in her community in Arlington, Virginia. Kissel told The Associated Press the rule is "basically prioritizing those rural areas over the underserved urban areas where there is more population."

Several cities have urged the Treasury Department to change the rule. The cities include Washington D.C., Los Angeles, Milwaukee, Wisconsin and San Antonio, Texas. Some officials want the government to define underserved areas as places with internet download and upload speeds below 100 Mbps.

One study suggests that, by changing the definition of high-speed internet, 82 million households and businesses instead of 11 million would see gains from the aid. The study was carried out for America's Communications Association, which represents small and medium-sized internet providers.

If the Treasury Department goes forward with its rule as proposed, internet speeds in some rural areas currently lacking broadband could jump ahead of some city areas. That possibility has been criticized by some mayors.

"The inner city of Memphis is as in a dire need of broadband connection as rural Tennessee," said Memphis Mayor Jim Strickland.

In Milwaukee, people already have at least one internet provider offering download speeds of 25 Mbps and upload speeds of 3 Mbps. But in some parts of the city, fewer than half the households have internet service because of the cost, said David Henke, the city's chief information officer.

"If you don't have a job and you can't afford broadband, that's kind of a cycle," Henke said. "You're locked out of remote learning, remote work, telemedicine and participating basically in a modern society."

Broadband industry groups have urged the Treasury Department to keep to its plan to provide money to areas with the slowest internet speeds.

Although the public comment period ended in July, the Treasury has set no date to publish the rule's final version. A Treasury official said the process of examining the comments is likely "to continue into the fall."

upgrade – v. to improve something by making it newer or better quality

eligible – adj. qualified to take part in a program or activity

remote – adj. far away, from a distance

prioritize – adj. to decide which of a group of things are the most important and require attention first

urban –adj. belonging or relating to a city

afford – v. have enough money to buy something

cycle -–n. a set of events or actions that happen again and again in the same order