Update Required To play the media you will need to either update your browser to a recent version or update your Flash plugin.
By VOA
31 December, 2014

Abraham Lincoln did not live to see the final surrender of the armies of the Confederacy. A Confederate sympathizer shot the president at Ford's Theatre in Washington on April 14, 1865.

By that time, however, the American Civil War was over. The Capitol building during the "grand review" of the Union Army in Washington, DC

General Robert E. Lee surrendered in early April, bringing an end to four years of fighting. Several other Confederate armies were still in the field. But they were too small and too weak to continue the fight.

One by one, the remaining armies surrendered. The soldiers began returning home.

Late in May, 150,000 Union soldiers, representing every one of the Union armies, came to Washington. They came to take part in a victory march through the city. 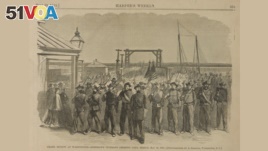 For two days, the soldiers marched past the White House. Many of the men had fought at Bull Run, Antietam, Gettysburg and Appomattox. Sherman's western army was there from battles at Shiloh and Atlanta.

The soldiers marched proudly past the new president, Andrew Johnson, and other government leaders.

Finally, the last group of soldiers passed the White House. The grand parade was over. The battle flags were put away, and the marching bands fell silent. The war was ended. Now, people could look about them and count the cost of the war. 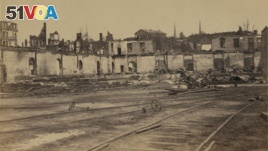 Civil War Destruction: Ruins of the Railroad Yards at Richmond

Four years of bloody fighting had saved the Union of states. The northern victory had decided that states could not leave the Union. And it had put to rest the great problem of slavery, which had troubled the nation for so many years. But the costs were great. More than 600,000 men of the North and South lost their lives. Hundreds of thousands more were wounded. Many had lost their arms or legs.

The war cost the North over 3 billion dollars. The war was almost as costly to the Confederates. Most of the war was fought in the southern states. And most of the war damage was there.

Some towns and cities -- including Atlanta -- were completely destroyed. The damage outside the populated areas was almost as great. Union armies had marched across the South, leaving behind them widespread destruction. Farm houses and buildings had been burned; animals and crops seized or destroyed. 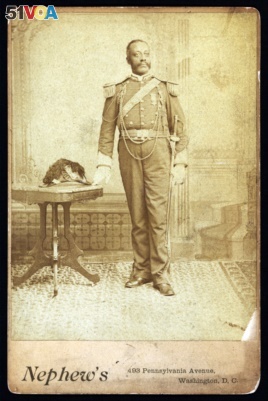 There was also the question of the four million former slaves. They were free now. But they needed jobs and training. Once again, the American people debated the best plan for moving the country forward.

Frank Beardsley wrote this story. George Grow was the editor.

Editor's Note: Thank you for reading and listening to The Making of a Nation series. The series started in the 1960s as a radio drama. It has more than 250 episodes. If you listened to it once a week, you would need over four years to reach the end!

In 2015, we will be updating the series with more interviews, videos, and lessons. While we are working on the new series, you can still read and listen to the original series in our The Making of a Nation archive.

put to rest – v. make someone stop thinking about or believing something

costly – adj. causing people to lose something or to suffer