Update Required To play the media you will need to either update your browser to a recent version or update your Flash plugin.
By VOA
05 October, 2012

A Syrian artillery attack this week killed five civilians in Turkey. It was one of the most serious cross-border incidents since the fighting in Syria began a year and a half ago.

Forces loyal to Syrian President Bashar al-Assad are accused of firing a shell that struck a house in Akcakale on Wednesday. Two women and three children died. Turkish forces shelled Syrian targets to answer the attack. 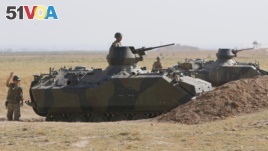 Turkey / Syria Border
Also, Turkey's parliament passed a one-year measure approving military intervention into Syria if necessary. Under the Turkish constitution, the government needs that permission to operate outside Turkey.

Parliament easily passed the measure, but the main opposition party voted against it. And opinion surveys show that the Turkish public strongly opposes any heavy military action against Syria.

Inside Syria, the war continues with intensity. In Aleppo, the country's largest city, the few hospitals that are still open are struggling to treat victims of the conflict. VOA reporter Scott Bobb and cameraman Sebastian Meyer visited one of those hospitals.

SCOTT BOBB: "Dar al-Shifa Hospital in Aleppo. Staff treat soldiers of the rebel Free Syria Army wounded in various battles this morning. They are also treating civilians. This boy was hit by a bullet. It went through his shoulder and lodged in his chest. This family arrives in panic and in grief. A mortar shell hit their home. Two babies are among the wounded. A teenager arrives with a shattered leg. He will survive but as an amputee. The father lies on the sidewalk. He died before reaching the hospital, hit by shrapnel in the head."

The hospital was heavily damaged and is able to provide only emergency first aid. After treatment, the wounded are sent home or, if they need more attention, to Turkey -- two hours away.

The Syrian conflict sometimes spills into Turkey, as the attack on Wednesday showed. Turkey has sent more troops to the border since Syrian anti-aircraft fire shot down a Turkish warplane in June. But Cengiz Aktar, a political scientist at Istanbul's Bahcesehir University, says there is no desire for a war with Syria.

CENGIZ AKTAR: "Turkey is entering quite a difficult period economically speaking and I do not think they would like to add more expenditure to their already very strained budget."

Turkey's forces are much larger and more modern than Syrian forces. But the Turkish military is battling Kurdish rebels. And it has other issues requiring its attention. Last month, more than three hundred army officers were found guilty of plotting against Turkey's government.

The government has, in the past, said it would not intervene by itself in Syria. But Turkey is finding little international support for intervention from the United Nations or NATO. And political observer Sinan Ulgen says Turkey has been generally dissatisfied with international reaction to the Syrian crisis.

SINAN ULGEN: "Turkey feels that it has been left alone to deal with crisis on Syria. The international community, despite having engaged in the rhetoric of the responsibility to protect, did not live up to the bargain."

And that's IN THE NEWS in Special English. You can find transcripts, MP3s and podcasts of our programs at voasepcialenglish.com. And you can find us on Twitter and YouTube at VOA Learning English. I'm Bob Doughty.