Update Required To play the media you will need to either update your browser to a recent version or update your Flash plugin.
By Bruce Alpert
07 February, 2016

Classified information is considered too sensitive to be shared outside of top government officials. It is supposed to be kept under tight security. 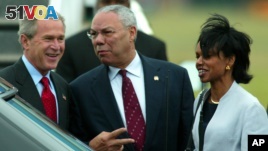 Former President George W. Bush arrives at Shannon Airport in western Ireland with Colin Powell, who was then his secretary of state, and Condoleeza Rice, who was his national security adviser, June 25, 2004. Rice later became secretary of state.

Critics of Democratic presidential candidate Hillary Clinton point to her use of her personal email account. The new State Department report could help show that she was not alone in this use.

Clinton has been forced to defend reports she received classified information via emails as secretary of state in the Obama administration.

In his report, Linick said his office reviewed 19 emails sent to Powell and aides to Rice. He said State Department officials decided 12 of the 19 contain classified information.

Powell said this in a statement: “I have received the messages and I do not see what makes them classified.”

An aide to Rice told the Associated Press that Rice did not use emails as secretary of state. The aide said 10 emails now questioned by the State Department “contained no intelligence information.”

John Podesta, chair of the Clinton campaign, said “Hillary Clinton agrees with her predecessors” that emails are being wrongly labeled as classified.

We want to hear from you. Write to us in the Comments Section. Share your views on our 51voa.com.

classified – adj. kept secret from all but a few people in the government

sensitive – adj. likely to cause people to become upset

review – v. an act of carefully looking at or examining the quality or condition of something or someone

predecessor – n. a person who had the same job before you