Update Required To play the media you will need to either update your browser to a recent version or update your Flash plugin.
By Dan Friedell
25 April, 2016

The relatives of Tamir Rice will receive a $6 million settlement from Cleveland, Ohio.

Rice was 12 years old when he was killed by police officers in November 2014. Rice was playing with a toy gun in a park. The police thought it was real.

Rice, an African-American, became one of the symbols of the Black Lives Matter social justice campaign. The movement highlighted a number of young black men and women who were killed by police officers in recent years. 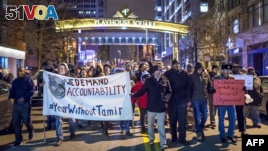 FILE - Protesters march on Cleveland's Huron Road on Dec. 29, 2015, the day after a grand jury declined to indict Cleveland Police officer Timothy Loehmann for the fatal shooting of Tamir Rice on Nov. 22, 2014.

Michael Brown was killed by officers near St. Louis, Missouri in the summer of 2014. Freddie Gray died while in custody of the Baltimore, Maryland police in the spring of 2015.

The hashtag #BlackLivesMatter was one of the most important trending topics of 2015. The social justice movement continues to be part of the political conversation in the U.S. as the presidential election gets closer.

A grand jury decided not to charge the police officers who killed Rice with a crime. They concluded that the use of deadly force against Rice was justified. They said the officer did not know if the gun was real.

Rice's family filed a "wrongful death" lawsuit against the city and the police officers shortly after Rice was killed. A judge announced the decision to award $6 million to Rice's family on Monday.

Lots of people had something to say about it on social media. #TamirRice was one of Twitter's top hashtags on Monday.

Many people reacted to one part of the settlement. It says the city does not have to accept responsibility for doing something wrong.

One person wrote "the settlement [with] #TamirRice is infuriating."

Another, Devin Lamar, wrote "I'm glad #TamirRice family is getting $6 million from the city of Cleveland, but it'd be a lot cheaper to just train police not to shoot us."

Cerece Rennie Murphy wrote, "no amount of money could ever make this right."

While many people have sympathy for Rice and his family, others think it is time for the people behind the Black Lives Matter movement to take action.

One of those critics is President Barack Obama. During his visit to London over the weekend, Obama was asked about racial profiling. He turned his attention to Black Lives Matter during his answer.

Obama said "[when] elected officials or people who are in a position to start bringing about change are ready to sit down with you, then you can't just keep on yelling at them."

He continued, saying "the value of social movements and activism is to get you at the table, get you in the room, and then to start trying to figure out how is this problem going to be solved."

What do you think about the Tamir Rice settlement? We want to know. Write to us in the Comments Section or on 51VOA.COM.

racial profiling – n. the act of suspecting a person of a crime because of their skin color, religion or ethnic background

justified – adj. something that is right or reasonable

grand jury – n. a group of people who look at the evidence against someone who has been accused of a crime in order to decide if there should be a trial