Update Required To play the media you will need to either update your browser to a recent version or update your Flash plugin.
By VOA
01 May, 2017


Millions of people share material like videos and news stories with their friends and family over the Internet every day.

In 2016, the Pew Research Center reported about 62 percent of adults in the United States get their news from social media.

Now, some U.S. colleges and universities have decided they want some of that internet action. And they are using a kind of web content known as ‘clickbait' to get it.

Clickbait is content that is designed to attract web users and persuade them to click on a link to a webpage.

Clickbait often uses shocking headlines that make users feel like they have to know more, like "What Famous Stars Look Like Without Makeup" or "Five Common Foods That Could Kill You."

People are likely to want to learn what those foods are. So they click on the link. Often this leads to a page with an advertisement written as a news report. And the page is also usually filled with more clickbait.

The more clicks these websites get, the more advertisers pay the website owners.

Buzzfeed is one of the most popular websites in the U.S. For years, critics have viewed Buzzfeed as a major source for what they call clickbait.

Some Buzzfeed reports are based on lists, like "23 Things Parents Should Never Apologize For" or "50 Tweets That Show How Different America and Britain Are."

The lists include lots of pictures and little written information. 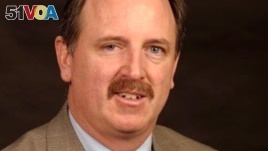 Chad Baldwin, vice president of communications at the University of Wyoming.

Other Buzzfeed reports are advertisements, like "13 Things You Could Actually Buy If You Didn't Have Student Loan Debt." The University of Wyoming paid for that one. The ad promotes the school's lower costs of education.

Temple University in Philadelphia, Pennsylvania was one of the first universities to partner with Buzzfeed in 2015. Shortly after, schools like Indiana University and the University of Wyoming began working with Buzzfeed, as well.

Chad Baldwin is the vice president of communications at the University of Wyoming. His school paid $100,000 for two pieces of material from Buzzfeed in 2016. He admits it was costly. But he said the stories on Buzzfeed have received more than 100,000 views.

"There are a lot of the traditional things we still use," Baldwin said. "[But] the social media element is huge and anyone who resists engaging in those [ways] is probably going to get left behind."

Jay Baer is the creator of U.S.-based Convince & Convert, a marketing company that deals mostly with social media. He is also a parent of a high school student currently choosing a college to attend.

Baer said there are many media companies that do this type of branded advertising for businesses. This includes large newspapers like The New York Times. And he feels that universities should have considered this method of advertising much sooner.

But he also said he is concerned about the ethics of universities using this kind of advertising and about news media sites that receive money from businesses.

"As a parent, I wondered whether this was actually informing potential students ... and how [trustworthy it] is," Baer said. "Does it concern me as a citizen that people who report the news are also making [material] for money? Yeah, of course. But I don't know what the alternative is."

Stephen Loguidice is the vice president of global brand development for Buzzfeed. He said Buzzfeed does not create clickbait and its content is not all paid advertising.

Loguidice said Buzzfeed understands how young people react to advertising. He said most do not trust or even see information on television or in print media. He said young people seek information from content shared on social media.

"It's always been, ‘How do I get the message that I want to say in front of the people I need it in front of?'" Loguidice said.

"With social [media], now [companies] have to think about, ‘How do I say what they want to hear and not necessarily what I want to say?' And at the end of the day, now [companies are] competing with friends and family and co-workers and trusted news sources and all these other things."

In traditional advertising, a company tells an advertiser exactly the kind of message it wants to send. But Buzzfeed studies its most popular stories and uses that information to create copy.

Instead of forcing people to listen to a company's message, Buzzfeed includes parts of that message in with other interesting material.

For example, the online music service Spotify paid Buzzfeed for a branded marketing campaign in 2014. Buzzfeed then created a story for them with the headline "15 Of The Best Bands To Come From College Campuses."

Jennifer Cronin is a professor of marketing and social media in the Mendoza School of Business at the University of Notre Dame. She noted that Buzzfeed's materials could be considered clickbait. But, she said there is also nothing wrong with that. And the website clearly shows what is and is not paid advertising, she said.

Yet she did warn that several companies have faced trouble recently for things they have said or shared themselves online. Companies can lose public favor easily if they are connected to online material considered offensive or untrustworthy.

She said, "Colleges are supposed to be very elite and [centered] on academics. ... And so, when you use these other [methods], if you do it poorly then there is the chance that you could harm your reputation."

Pete Musto reported this story for VOA Learning English. Caty Weaver was the editor. We want to hear from you.

What do you think is the best way for universities to share their message with the current generation of young people? Should colleges be using this type of branded marketing? Write to us in the Comments Section or on 51VOA.COM.

website(s) – n. a place on the internet that contains information about a person, organization or thing, and that usually consists of many websites joined by hyperlinks

click – v. to press a button on a mouse or some other device in order to make something happen on a computer

headline(s) – n. the title written in large letters over a story in a newspaper

branded – adj. having a well-known brand name, or name of a category of products that are all made by a given company and all have a given name

band(s) – n. a usually small group of musicians who play popular music together

elite – adj. seen as the most successful or powerful

academics – n. courses of study taken at a school or college