Update Required To play the media you will need to either update your browser to a recent version or update your Flash plugin.
By Christopher Jones-Cruise
13 November, 2016


The government of Vietnam is seeking to help the main rice-producing part of the country deal with difficult agricultural issues.

The area is known as the Mekong Delta. It is home to 18 million of Vietnam's 94 million people. More than half of the country's rice is grown in the area, which feeds more than 145 million people in Asia.

The Mekong begins in Tibet. It passes through six countries: China, Myanmar, Laos, Thailand, Cambodia and Vietnam. Some of these countries are building dams that are affecting the river. 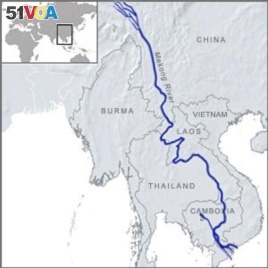 The Mekong River is a major river of Southeast Asia.

Worries about the future of the Mekong Delta increased after an extreme lack of water this year caused the area to become saltier than normal. The United Nation's Food and Agriculture Organization, or FAO, said rice production fell by 1.1 million tons.

Philip Hirsch is a professor at Sydney University. He says climate change is causing sea levels to rise and bringing more storms to the area. "One of the big concerns is the amount of salt water and the distance the salt water moves up various Mekong tributaries into the Delta, which again threatens the viability of rice farming," he said.

International scientists are working with scientists in Vietnam to find solutions to the problems. Their project is called CLUES, which stands for climate change affecting land use in the Mekong Delta.

N.D. Phong is one of the leaders of the project. He said among the issues the Mekong Delta faces are rising levels of salt and fresh water, higher temperatures, rising greenhouse gases and a large population. The Delta also faces the possibility of lower rainfall, reduced numbers of farm laborers and reduced valuable land.

CLUES scientists are developing kinds of rice that can grow in areas of rising salinity, when water levels are too high, and in dry conditions.

Australia's Center for International Agricultural Research, or ACIAR, is also helping Vietnam improve rice production. ACIAR scientists say Vietnamese rice farmers have adapted to changing conditions over the past 30 years. They are still worried about the future however.

Leocadio Sebastian is based in Vietnam as a regional program leader for South East Asia for the International Rice Research Institute, or IRRI. He says Vietnam is going to try to increase farm incomes and rice quality. He says IRRI and the Vietnamese government are going to try to get farmers to grow two crops a year instead of three. They also want them to grow higher-value grain.

Sebastian told VOA "they have to position the Vietnam rice to a higher quality and higher priced level so that the farmers now and in the future can have a better income from rice production."

Scientists say the area also faces a threat from the increasing numbers of hydroelectric dams being built on the Mekong River in China, Laos and Cambodia.

Chris Barlow is an ACIAR fisheries expert. He says the dams will have a severe effect on the lower Mekong area.

In a report about the conflicts between hydro-power and fisheries, he wrote that "China has completed three large dams on the Mekong and five (more) are being built or being planned. These dams have major impacts on hydrology and completely block fish migration in the Upper Mekong."

He said plans for nine high-level dams in Laos and two being built in Cambodia will have "severe impacts" on fisheries and food security.

Scientists say the dams will change the flow of rivers and tributaries and lower water temperatures, among other effects.

Barlow says hydro-power may produce economic gains, but "the fishery and other ecosystem services provided by the river will be permanently degraded."

Le Anh Tuan is the deputy head of the Institute of Climate Change Research at Can Tho University. Le told Vietnamese media that damming threatens the future of the Mekong Delta.

Sydney University's Hirsch says Vietnam's government needs to be "more assertive" with members of the intergovernmental Mekong River Commission. He says the group should "try and put a brake on the very rapid pattern of hydrological development in the upstream countries."

Hirsch fears the area's most-productive years may have been before damming on the river began. He says in the early 1990s, Vietnam, once a large importer of rice, became the world's second largest exporter.

Hirsh says efforts by China, and more recently Laos, to put dams on the river may have started a drop in food production in the Mekong Delta area.

tributary – n. a stream that flows into a larger stream or river or into a lake

value – adj. the amount of money that something is worth; the price or cost of something

degrade – v. to make the quality of (something) worse

brake – n. something used to slow or stop movement or activity (usually + on)