Update Required To play the media you will need to either update your browser to a recent version or update your Flash plugin.
By Anna Matteo
25 November 2022


Life in a city can be especially hard for a tree.

Buildings, pollution, poor soil, insects, and even car crashes can add to tree loss. Now, the warming climate is making a tree's life even harder.

Between 2016 and 2021, a report from the city of Seattle in Washington state said the city lost about 255 hectares of tree covering. The report blamed climate change in part for the loss. 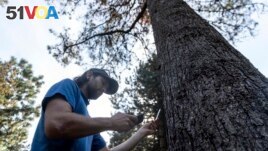 Then came the driest summer on Seattle's record books in 2022. The drier conditions and hotter temperatures have left many trees with brown leaves, naked branches, and extreme seeding. These are all signs of tree stress.

A tree expert at Washington Park Arboretum, Shea Cope, said that you can see evidence of tree stress in maple and hemlock trees. "(They are) just loaded with cones or seeds. It's kind of their last-ditch effort to reproduce."

Nicholas Johnson is a tree expert for Seattle City Parks. He said if this warming climate continues, "...we are going to have a lot of trees die." "Under the heat," he said, "trees get weak — just like people."

Researchers from France and Australia studied the effect of hotter temperatures and less rain on more than 3,100 trees and plants in 164 cities across 78 countries.

They found about half the trees in the cities were experiencing climate conditions beyond their limits. They also found that by 2050 nearly all trees planted in Australian cities will not survive.

David Nowak is a retired scientist for the U.S. Forest Service. He said, "It's not the gradual change that's going to be the problem. It's these extreme swings of too much water, too little water, too much wind, and storm intensities (that) are going to cause these rapid changes."

In 2005, Hurricane Katrina destroyed about 10 percent of the trees in New Orleans, Louisiana, said Michael Karam, Director of Parks and Parkways. And in 2021, he added, Hurricane Ida uprooted many new tree plantings.

With climate change, researchers are also concerned that many cities will lose newly planted trees before they reach maturity -- between 10 to 20 years.

Non-native trees have been brought to cities for some time. However, climate change is causing many tree experts to specifically consider them — a practice called "assisted migration."

In the city of Bellevue, Washington, experts are growing different kinds of trees specifically for climate change. On city grounds, they are planting baby giant sequoias, just a few centimeters tall.

The giant sequoias are not native to the Pacific Northwest area. But tree managers in this city east of Seattle are planting more sequoias because the trees can deal with the lack of rain and insects.

"Once these trees are established, they grow incredibly fast," said Rick Bailey of the city's forest management program.

Planting more non-native trees is also drawing attention to something city tree experts have learned from years of tree deaths: having many different kinds and ages of trees is important to keeping urban forests alive.

stress – n. a physical, chemical, or emotional factor that causes bodily or mental tension and may be involved in causing some diseases

last-ditch – adj. made as a final effort especially to avert disaster

swings – n. a sudden change in state or condition

management – n. the conducting or supervising of something (such as a business)