Update Required To play the media you will need to either update your browser to a recent version or update your Flash plugin.
By Kelly Jean Kelly
12 December, 2014

Participants aimed to create a plan for reducing greenhouse gases around the world. They expected the plan to develop into a firm agreement at the next major climate change talks in Paris next year.

The participants – including the Secretary-General of the United Nations, Ban Ki-moon — agreed on the importance of limiting climate change. 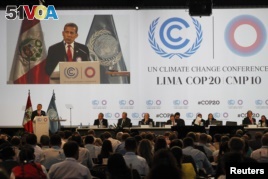 "I carry a message of hope and urgency..."

But they could not always agree on how to reach their goal.

Representatives from developing nations repeated their belief that wealthy countries should take more responsibility for reducing their carbon pollution.

But U.S. Secretary of State John Kerry said Thursday that more than half of global warming gases come from developing nations. He said those nations must also make changes.

Scientists warn that greenhouse gases are causing the world's temperature to rise. Global warming, they say, will cause droughts, floods and rising oceans.

Many participants said that climate change was a human rights issue. Mary Robinson is the former president of Ireland and the United Nations Special Envoy for Climate Change.

"We need strong language about human rights because all climate action -- adaptation, mitigation -- helps human rights. But if we don't get that strongly into the message, we won't understand it's about people."

Francesco Martone, who attended the talks, said Ms. Robinson has been a good spokesperson for human rights. Mr. Martone is a senior policy advisor for the Forest Peoples Programme. The group supports the hundreds of millions of people who depend on tropical forests in South America, Asia and Africa. Many of those forests are being severely reduced by development, including mining, logging and commercial farming.

"Let's say that there is a cultural problem. Because the climate change negotiations are about carbon. So the key concern is that of ensuring that, you know, any action that will be undertaken will be quick and without any specific hurdles. That the money flows out very quickly and without key hurdles, like safeguards."

In the New York Times, reporter Eduardo Porter discussed the same issue. He wrote that many governments do not want to slow economic growth by adding or enforcing environmental or human rights restrictions.

greenhouse – adj. related to the warming of the Earth's atmosphere caused by air pollution

carbon – n. element that is found in petroleum and in all living plants and animals

mitigation – n. the making of something less severe or harmful

indigenous – adj. existing naturally in a particular region or environment