Update Required To play the media you will need to either update your browser to a recent version or update your Flash plugin.
By Anne Ball
20 March, 2016


Scientists found sea levels are rising faster today than anytime over the past 3,000 years.

Another group of scientists found that January temperatures in the Arctic hit a record high.

The sea level researchers gathered information going back 28 centuries. Their findings were released Monday by the Proceedings of the National Academy of Sciences.

Robert Kopp, from Rutgers University in New Jersey, is the paper's lead author. He said the 20th century rise was "extraordinary" when compared to the past 3,000 years. 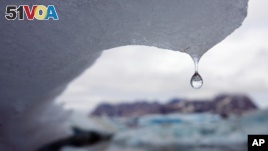 And, Kopp said, "the rise over the last two decades has been even faster."

When temperatures rise, so do sea levels. That is because snow and ice melt, or break off from glaciers. They flow into the sea. The increased water makes the sea levels rise.

The best estimates show that temperatures around the Earth have risen more than a half-degree Celsius since 1880. Scientists say that most of that rise is because of emissions, or gases, released into the air by machines that humans have built.

And it is not going to get better. The water is going to rise, said Stefan Rahmstorf. He is a professor of ocean physics at the Potsdam Institute for Climate Impact Research in Germany and the study's co-author.

"I think we can definitely be confident that sea level rise is going to continue to accelerate if there's further warming," he told The New York Times. He said "inevitably there will be" more warming, which means it will continue to rise.

One question is how much will the sea levels rise? And for how long? The researchers said the Earth's sea level could rise more than a meter by the year 2100.

Scientists from NASA and the National Oceanic and Atmospheric administration reported that temperatures at the North Pole hit record highs in January.

This news comes after 2015 has been the hottest year ever recorded.

On average, the North was almost 4 degrees Celsius higher in January than average temperatures between the years 1951 and 1980. This news comes after researchers reported a record low amount of sea ice up North. The National Snow and Ice Data Center said the amount of January sea ice is 644,000 square kilometers below average.

Scientists point to "The Blob," or an unusually warm area of water in the northern Pacific Ocean. It is millions of kilometers wide and keeps temperatures about three degrees warmer than usual in that area.

Are you concerned about rising sea levels and temperatures? We want to hear from you. Write to us in the Comments and on 51VOA.COM.

glacier –n. a very large area of ice that moves slowly down a slope or valley or spread out over land

emissions –n. the producing and sending out of something, usually gas or radiation.

accelerate –v. to speed up