India's Farmers Changing What and How They Grow

Update Required To play the media you will need to either update your browser to a recent version or update your Flash plugin.
By VOA
16 September, 2014


Scientists have long warned that rising temperatures, also known as climate change, can affect agriculture around the world. Some scientists are now teaching farmers about new technologies to change the way they farm. At one "climate smart" village in India, farmers are changing their farming methods to meet the problem of new weather patterns.

Harpreet Singh is a farmer in Taraori village in the northern Indian state of Haryana. He says recent years of hot, dry weather have damaged the rice and wheat crops on his 30-hectare farm.

But unlike other farmers, the weak rainy season rains this year did not worry him. 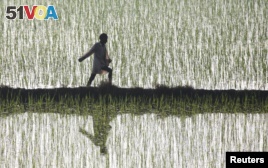 A farmer spreads fertilizer in a paddy at Taraori village, Haryana state, India.

Mr. Singh has changed the way he grows rice. The old method was to grow small rice saplings and move these plants to the rice paddy. Now he plants "direct-seeded rice," which means seeds are put directly in the paddy. This method uses much less water than the old one.

Mr. Singh smiles as he looks on his rich rice crop, and tells about another new farming method. He uses a laser light to make sure his fields are level, or flat. He says this helps him save 25 to 30 percent more water. The high-tech method helps water stay in the field longer, so it does not quickly flow away from it.

Haryana State produces a large amount of grain. The area is now home to 26 "climate smart villages." They are all part of an effort led by a research group called Climate Change, Agriculture and Food Security in India.

India presently grows enough food to meet the needs of its 1.2 billion people. Yet scientists say unusual weather conditions, including floods, dry periods, and extreme weather events, could be a danger to food security.

Agricultural economist Surabhi Mittal has been involved in the "climate smart project". She says teaching farmers how to become strong in the face of climate change is important. She explains that farmers are not getting as much food as they used to from their crops. They cannot make good decisions because they do not know how the weather will be in the future.

Farmers agree. In Haryana's Anjanthali village, Vinod Kumar used to grow rice and wheat using traditional methods on his farm. But in recent years, he says, there are new diseases attacking crops such as wheat. Even the leaders of his village do not understand these new diseases. Scientists think they are caused by temperature changes.

Mr. Kumar says the new techniques have helped protect his crops and his pay. They have even increased the food he can grow in his fields. Each year he leaves part of the crop on his fields as food for his crop next year. As a result, he does not need to buy fertilizer for his plants. This is better for the soil, too.

Using too much fertilizer is a common problem in India. It not only ruins soil health, but adds to greenhouse gases – pollution linked to climate change. For that reason, farmers are being taught to use a tool that helps them decide how much fertilizer they need to use.

Another major effort is to persuade farmers to change what they grow. In areas where there is little water in the ground, farmers are asked to grow corn instead of rice.

In Anjanthali, 34-year-old Vikas Chaudhury says his corn crop is now ready for harvesting in 90 days instead of the 120 days it takes to grow rice. He says the change also requires less water and gives him enough time to prepare his soil for the next crop.

But many farmers do not want to change from growing rice to growing corn because they say rice is a more profitable crop.

M.L. Jat is a leader of the climate change project. He says that falling water levels could make it difficult to keep growing rice in paddies. He thinks that it is important for communities to work together to survive climate change in general.

Many scientists agree that change will come slowly. In the "climate smart villages" some farmers have not yet made any changes. They are waiting to see if the farmers who are using the new methods will succeed.