Clinton, Trump are a Study in Contrasts

Update Required To play the media you will need to either update your browser to a recent version or update your Flash plugin.
By Hai Do
06 May, 2016


American businessman Donald Trump and former Secretary of State Hillary Clinton are likely to face each other in the U.S. presidential election this year.

Both candidates call New York State their home. But that might be the only thing they have in common.

Donald Trump came from a wealthy family. He is known for building hotels and casinos around the world. 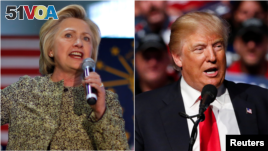 The businessman says that the U.S. political system is broken and it will take a non-politician like himself to fix it. Trump has never held political office. He is known for his promise to "make America great again."

Trump is the likely presidential candidate of the Republican Party. But he has had difficulty getting the support of the party's conservatives.

On Thursday, Paul Ryan, the Speaker of the House of Representatives, said he is "not ready" to support Trump as the nominee. Ryan was the party's choice for vice president four years ago.

Hillary Clinton grew up in a middle class family near Chicago. She has a lot of experience in politics. She has been a lawyer, a professor, activist, former First Lady, former U.S. Senator and former Secretary of State. Clinton now is campaigning to become the first woman president in U.S. history.

Her last remaining opponent for the Democratic Party nomination, Vermont Senator Bernie Sanders, continues his campaign against her. He has gained surprisingly strong support from young Democratic voters.

The experiences of Clinton and Trump have shaped their ideas about America's place in the world.

After the San Bernardino, California terror attacks of December 2015, Trump suggested banning all Muslims from entering the United States. Trump has said he supports the use of waterboarding when U.S. agents question suspected terrorists. He also supports the bulk collection of information on Americans' telephone data.

Recently, Trump questioned whether the North Atlantic Treaty Organization is "obsolete." And, he has said he wanted American allies like Japan and South Korea to pay more for their share of defense costs.

Clinton said the United States should accept 65,000 refugees from Syria. But, she wants more careful screenings of travelers from countries where terrorists are active.

She supports the closing of the Guantanamo Bay detention center in Cuba and the banning of interrogation methods like waterboarding. She also has called for strengthening existing ties with American allies in Europe and Asia to contain Russian and Chinese influence.

Both Clinton and Trump support a stronger U.S. military presence in East and Southeast Asia to answer China's influence. At the same time, both candidates want China to use its influence in dealing with nuclear-armed North Korea.

As for Russia, Trump said that he "would probably get along with (Russian President Vladimir Putin) very well." Putin, in return, praised Trump as "a bright and talented person."

The two candidates have different ideas about the nuclear arms agreement with Iran. Trump calls it a "terrible" deal. He says it threatens Israel, an American ally, and opposes the lifting of sanctions against Iran.

Clinton supports the Iran nuclear agreement, but says she will punish Iran for any violations.

Stopping illegal immigration is a central issue in Trump's campaign. The businessman wants to build a wall along the U.S. border with Mexico to keep out illegal immigrants. As for illegal immigrants already in the U.S., Trump wants to expel them. He also is calling for limits on the guest workers visa program and ending birthright citizenship.

Clinton says immigration is an economic and "a family issue." She supports new legislation to provide a path to U.S. citizenship for more than 11 million undocumented immigrants.

As Obama's secretary of state, Clinton supported the Trans-Pacific Partnership (TPP) trade agreement. She considered it an important part of the administration's "pivot to Asia" policy. However, as a candidate, Clinton opposes the trade deal and says it will not create jobs for Americans.

Trump says he supports free trade, but has opposed several free-trade agreements. He called the North American Free Trade Agreement (NAFTA) a "disaster." He says the TPP helps China, Japan and big businesses, but not American workers. Trump wants to punish China for unfair trade actions. He calls China a currency manipulator and wants to tighten rules on theft of intellectual property.

On Energy and Environment

Trump says climate change is not a problem and wants to reduce the U.S. Environmental Protection Agency. He says the Obama administration has wasted billions of dollars on "green" energy programs.

Clinton says she wants to make the U.S. "the world's clean energy superpower." She says she will honor the Paris agreement to limit global carbon gas emissions and expand U.S. investment in "green" energy. Clinton opposes oil drilling in the Arctic areas of Alaska and the building of the Keystone pipeline across the U.S. Midwest.

Hai Do wrote this story based on information from VOA news and the Council of Foreign Relations. The editors were Mario Ritter and George Grow.

screening – n. the act of examining people or things in order to decide if they are suitable for a particular purpose

pivot – n. the act of changing the direction of a policy and moving in a different direction

manipulator – n. a person who uses or controls other people in a clever and often unfair or selfish way; a manipulative person

hydro-fracking – n. a method of drawing oil from the Earth using high-pressure water