Clinton Could Be First US Woman President

Update Required To play the media you will need to either update your browser to a recent version or update your Flash plugin.
By VOA
15 June, 2016


Hillary Clinton has earned enough delegates to win the Democratic Party's nomination for president. It will be the first time in U.S. history that a major party will nominate a woman for the nation's highest office.

Clinton won a majority of votes over a series of primaries and caucuses across the U.S. The last contest was held on Tuesday, in Washington, DC. Clinton won easily there over her opponent, Bernie Sanders.

Clinton's wins – in addition to the support of party officials called "superdelegates" – make her the Democratic Party's expected nominee. Her party will officially choose her at the Democratic National Convention next month. 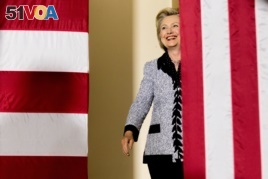 That event will be new to U.S. history: For 227 years, every other major party presidential candidate has been a man.

Terry O'Neill is president of a feminist activist group called the National Organization for Women. O'Neill said, "When I was a little girl, I used to hear people say things like, ‘In America, anyone can be elected president. And a little voice in my head would respond, ‘yeah, right.'"

"Today's news is tomorrow's history, and Hillary Clinton is making both," O'Neill said.

Clinton – a former secretary of state, U.S. senator and first lady – will run against Republican businessman Donald Trump in November. A new poll by NBC News and SurveyMonkey shows Clinton leading Trump 49 to 42 percent in the race for president.

Late to the party

Even if Clinton wins in November, the United States is far behind other nations in electing women to its top office.

The World Economic Forum reported that 63 countries have had a woman head of government over the last 50 years.

Women now hold the top office in Germany, South Korea, Poland and Norway. Brazilian President Dilma Rousseff was suspended by Brazil's senate, but could return to office if an impeachment trial goes her way.

This year, the United Nations will choose a new leader. Some are pushing the U.N. to elect its first female secretary general since its founding in 1945.

Why has it taken so long for the U.S. to elect a women president?

Jennifer Lawless is a political scientist at American University. She said the U.S. may be so far behind in part because not that many women here seek elected office. She said research shows women candidates win as often as men and raise as much campaign money, but not as many are willing to run for office.

There are several reasons, Lawless said. But a major one is that women often feel they are not qualified, or believe they have to be "twice as qualified" to beat a male candidate. She said men generally do not share doubts about their own credentials.

In U.S. politics, as in other countries, candidates often run what are called "negative campaigns." This common tactic involves criticizing opponents, hoping to make voters less likely to vote for them.

Adrienne Kimmell is executive director of the Barbara Lee Foundation, which encourages women to run for elected office. She said voters do not seem to mind when male candidates run negative campaigns, but they don't like it when women do.

"If they do, they (women) risk being called ‘the b-word, and I'm not talking about boring," Kimmell said.

Senator Mary Landrieu served three terms as a U.S. senator from Louisiana. She served with Hillary Clinton in the Senate.

"There were a lot of emotions the other night watching Hillary Clinton speak after winning the nomination, and I certainly felt them," said Landrieu, a Democrat. "It was history."

Landrieu said women in politics face a double standard. In other words, voters expect one kind of behavior for men, and another for women.

Asked for an example, she talked about her experience after being elected to the Senate for the first time in 1996. She was immediately criticized for setting up a home with her family in Washington near the U.S. Capitol.

At the time, Landrieu said she didn't want to be separated from her husband and two young children when the Senate was in session. She promised to return to Louisiana often.

"I got all this criticism about moving away from Louisiana and becoming part of Washington," Landrieu said. "The senators elected before me all lived in Washington. But nobody made anything of it." Those senators were all men.

Wait, didn't some other women run for U.S. president?

In this election season, businesswoman Carly Fiorina was one of 15 Republican candidates who lost the party primary to Donald Trump.

Other well-known women who ran for president were Margaret Chase Smith in 1964, Congresswoman Shirley Chisholm in 1972, former Labor and Transportation Secretary Elizabeth Dole in 2000 and Congresswoman Michelle Bachmann in 2012.

In 1988, Congresswoman Pat Schroeder competed briefly for the Democratic nomination. A New York Times story reported that she was often criticized for running as a woman. Her response: "Do I have a choice?"

The first-ever woman to be nominated for president was Victoria Woodhull. A group called the Equal Rights Party chose her as its candidate in 1872. One hundred years later, a Broadway musical described Woodhull's life as a millionaire stockbroker, as well as a supporter of women's rights and open marriages.

Woodhull reportedly did not win any votes – not even her own. As a woman, she was allowed to run for president, but not to cast a ballot.

On Tuesday last week, Clinton spoke to a crowd in Brooklyn, New York. She had just won four primaries, including the big ones in California and New Jersey. The wins were enough to make her the likely Democratic nominee.

Clinton told supporters how proud she was to become the first woman to win a major political party's nomination. She said her victory "belongs to generations of women and men who struggled and sacrificed and made this moment possible."

But not all women were excited. CNN published a report finding that most female voters under age 30 preferred Clinton's Democratic opponent.

Bernie Sanders has given no sign of formally ending his campaign for president, even though he does not have enough support to win.

Nichola Gutgold, a communications professor at Penn State University, is interested in women's response to Clinton. Gutgold, who also wrote a children's book about the history of women running for president, suspects some younger women don't know about the struggles women have had. She points out that the U.S. Constitution did not guarantee women's right to vote until 1920 — fewer than 100 years ago.

contest – n. an event in which people try to win by doing something better than others

respond – v. to have a particular reaction to something

impeachment -- n. to charge a public official with a crime done while in office

qualified – v. considered able to do a job

opponent – n. a person, team, group competing against another in a contest or election

excite – v. to cause a particular emotion or reaction to be felt or to happen