Update Required To play the media you will need to either update your browser to a recent version or update your Flash plugin.
By VOA
23 October, 2015

Her ability to remain calm while answering hostile Republican questions made her look presidential, some analysts said.

The hearing by the House Select Committee on Benghazi centered on the 2012 events at the U.S. consulate in the Libyan city of Benghazi. At the time, she was President Barack Obama's Secretary of State. 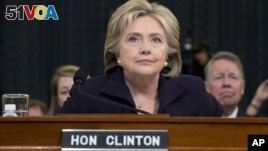 Larry Sabato, director of the Center for Politics at the University of Virginia, said Ms. Clinton did better than at the 2013 Senate hearing. At that hearing, she responded angrily to a senator's question about mistakes made in Benghazi.

"What difference, at this point, does it make?" she asked. That remark was played over and over again on American TV news shows.

This time Ms. Clinton let House Democrats argue it out with Republicans.

"Clinton kept her cool, unlike in January 2013," Mr. Sabato said. "That was critical. She looked and sounded statesmanlike. That also was critical. Democrats loved it. Republicans hated it. Few if any minds were changed. But Democrats are even more likely to back her bid for president now. Unless somehow a massive event intervenes, she's the party nominee."

This is a big difference from a few weeks ago, when her standing as the front-running Democratic presidential candidate was in question.

Since then, she won a televised debate with her challengers for the Democratic presidential nomination, according to most independent analysts.

And Vice President Joe Biden announced Wednesday that he is not going to run for president.

That is good news for Ms. Clinton. She would have lost more votes to Biden supporters than to her chief Democratic challenger, Senator Bernie Sanders from Vermont.

Also, two of her Democratic opponents, Jim Webb and Lincoln Chafee, dropped out of the race this week.

Even some conservative analysts admitted Ms. Clinton got the better of her Republican questioners.

"The hearings are a waste of time because everything about it is politicized and nothing is going to happen," wrote conservative columnist Erick Erickson in his blog Friday.

However, there was some drama during the nationally televised hearings.

In her opening statement, Ms. Clinton put her questioners on the defensive by saying how much the attack affected her personally.

Rep. Jim Jordan, a Republican from Ohio, said Ms. Clinton and other administration officials first blamed the attack on angry Muslims. But, he noted, Ms. Clinton had emailed her daughter and blamed terrorists.

"Two of our officers were killed in Benghazi by an Al Qaeda-like group," Ms. Clinton wrote.

Jordan said Clinton didn't want the true story to come out because "Libya was supposed to be ... this great success story for the Obama White House and the Clinton State Department."

He asked why she didn't "just speak plain to the America people."

She responded: "I did state clearly, and I said it again in more detail the next morning, as did the president. I'm sorry that it doesn't fit your narrative, congressman. I can only tell you what the facts were."

Did you watch the hearings? Do you agree with the analysts? Leave your opinion in the Comment section or on 51VOA.COM.

challenger -- n. an opponent or rival

pounding -- n. an beating, an attack

detractors -- n. those who try to defeat or dethrone another

statesmanlike – a. someone who acts like an experienced leader

narrative -- n. the telling of events